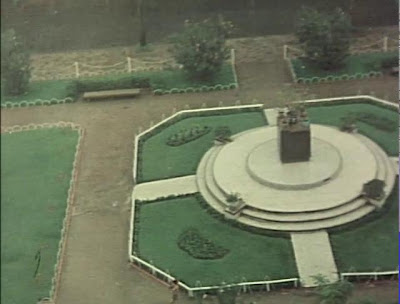 Two years after the fall of Saigon John Pilger returned to Vietnam to see the state of the country. Pilger had been reporting on the war for a decade (one third of the war’s length) and he had in many ways come to love the people of the country. The occasion was the reopening of the country to foreign visitors

Pilger’s film is an affecting mix of file footage of the war mixed with footage of the strangely peaceful country. Pilger relates stories of what he experienced when the war was raging with scenes of the reviving landscape.

If you think you know about the war and it’s cost you can pretty much forget it because Pilger will show you wrinkles you probably never considered, from cities that had been bombed flat and thrived under ground to what it was like in Hanoi during the bombing to what really happened at the American embassy in the final days.

It’s a shocking tour that puts a a very real face on the war and it’s insanity.

We also get a look at the cost after the fact. As Pilger was filming the country was going through a terrible famine on a level that made even the one in Biafra pale by comparison. The lack of food was partly the result of similar conditions to those in Africa but mostly it was a result of the war which deforested almost half the country turning it into arid plains, poisoned the land with its defoliant and because there simply wasn’t enough people in the country to grow food that people had to be forcibly moved out to farm.

Do I need mention the mutating of the people and animals thanks to all of the chemical in the water and soil?

Shocking doesn’t even begin to describe it. And I say this as a person who grew up with the war on the TV every night. Seriously my memories as a child of TV are Batman, The Monkees, cartoons and Vietnam.

This film is a trip. Its a film that alters how you see the war, even if you've read histories of the conflict. It alters things because you see it on a you are what happened in the places shown.

If you want to really understand what happened in the war see this film.

The film can be found on Vimeo here.

(Pilger made several other documentaries on Vietnam at various time periods after this. I hope to review them down the line.)
Posted by Steve Kopian at December 30, 2012