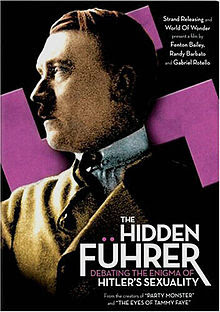 Was Hitler gay? Yea I know there are rumors but was it true? That question forms the basis of this documentary. Based on a book by a heterosexual German author that ignited a fire storm of controversy. The documentary made from the book takes a look at the issue from both sides.

I was prepared to laugh the film off since I had heard such terrible things about the book, however after seeing the film I'm left to wonder if there isn't at least a possibility. On the pro-side there is Hitler's attempts to destroy his past, his moving with in certain homosexual "haunts", his seeming familiarity with some of the gay ideas of the time including the idolizing of the male form with in a heroic context, allusions in the autobiography of a boyhood friend and other circumstantial reasons. The con-side consists of "no one has ever said they slept with him", "no one ever saw anything", and "there is no record of anything happening". Is there a lack of hard evidence? Yes, no one denies that. Does that mean that Hitler wasn't a closeted homosexual, absolutely not. As one person says at the start, if you're in the closet odds are you are going to do your damnedest to remain hidden. Besides just because you don't sleep with the object of your desire doesn't mean you're not made that way.

Honestly this is a really good documentary that at the very least puts forward the possibility in a way that can be taken seriously. The only real flaw in the film is that some of the readings from some of the sources, Hitler's boyhood friend for example, are presented in a tone which seems to imply they are really about a romantic attachment. The words are not that clear and implying that it is weakens the argument.

Will we ever know? probably not, but who knows. However if you'd like to at least entertain the possibility see this film.