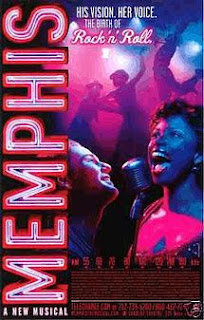 I don’t think that Memphis was ever really expected to be a hit musical. I know that when it won the Tony for Best Musical it got chalked up to it being the best of a bad crop of shows, of it not bad a weak group of shows.

I saw the show live twice and I loved it both times. It was vibrant and alive and very much a living show. It has one song ,Memphis Lives in Me, that haunts me still.

Because the show is very much a living breathing animal I was curious how it would play recorded. The recording was done with the intention of showing it in movie theaters as part the Fathom Events special screenings. The show was later picked up and run on PBS before being released on DVD.I saw some of the PBS run and I bought the DVD.

Set in the mid-1950’s the show tells the story of a cocky young man who loves rhythm and blues. Drifting into the colored section of town he finds his way into a club and despite the protests of the owner who fears trouble if a white man was found there, he ingratiates himself into being allowed to staying. He also finds the love of his life in the owners sister who sings in the club. The show then charts the course as the two lovers stars rise, he as a DJ (ala Dick Clark) and she as a singer.

The video version of the show is pretty good. It manages to portray the show as well as can be expected in a video format. To be certain the film loses a bit in that the camera focuses your attention on one thing so you don’t always see what is going on across the stage, and the rock and roll energy that the show created in the theater is greatly lessened because its obvious that the fourth wall hasn’t been broken and the actors are not singing to us at home. Still this is a damn fine reproduction of one of the more under rated Best Musical Tony winners
Posted by Steve Kopian at December 28, 2012