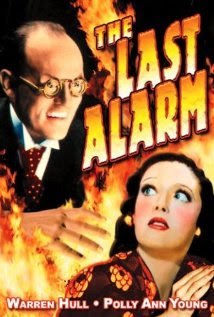 This small scale programmer maybe a bit unremarkable in many respects, but it’s one that is perfect for a night with some oldies.

The plot of the film concerns a crazed fire bug who is burning down the city. Spurred on by the death of a friend insurance investigator Fran ROgers begins to track the mad man. Aided by the father of his fiancé, a recently retired fire chief, he begins to turn up clues, which not only put the arsonist in his sights, but also puts him in the sights of the arsonist.

Tense little film moves like the wind. To be certain it hits almost every cliché you can think of it also hits them with great aplomb so you get carried along despite knowing that you shouldn’t. The real reason the film works is George Penbroke who plays the arsonist. An antiques dealer by day he spends his nights acting as the divine hand of the Vulcan, the god of the flame. He’s a creepy little figure that is exactly the sort of person you’d like never to run into.

As I said at the top on the face of it the film really isn’t all that remarkable, but it’s a film that kind of hangs with you in a way that many program pictures don’t. I say this as someone who has spent a good portion of my time wading through the countless hour long films that Hollywood cranked out. Even as enjoyable as many of them are, most kind of blend together with many of the titles getting lost in a sea of similar names. Last Alarm isn’t like that. This is a film that stands out when other films have crashed together.

Definitely worth running down, especially if you add another oldie or two to your evening at home on the couch.
Posted by Steve Kopian at December 19, 2012