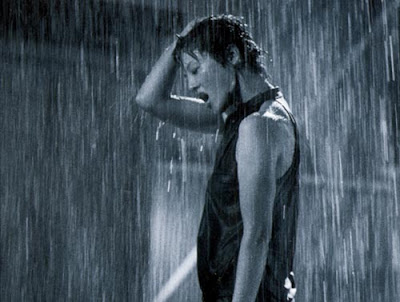 Rinko is beautiful young woman who works on the mental health hotline. She is married to a balding middle aged man who likes to clean the house. They get along great except that they don't seem to connect on a physical level, there appears to be no sex and the husband constantly leaving their bed to sleep on the couch. One day in the mail an envelope arrives seemingly from her husband its marked 'secret from your husband', which she thinks is about her husband doing something nice for her. To her horror she discovers its pictures of her masturbating and walking out in a very short shirt that her husband would never approve of. The photographer then contacts Rinko and tells her that in order to get the negatives she must "do what she really wants to". What transpires after this is Rinko's reawakening as a physical being as well as other twists and turns.

The film is structured in many ways like a thriller with Rinko horrified that there is someone stalking her, but at the same time the story flips and flops in other directions as it has other things on its mind rather then being a straight thriller. The film is dripping with eroticism even from the first frame, one need only listen to how many of the conversations play out to see that everyone has sex on their minds, even if no one really says anything.

I really liked this movie a great deal, however I know that it confounded my expectations so I'll have to watch it again.
Posted by Steve Kopian at December 05, 2012