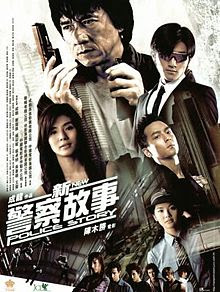 This was a return to great form for Jackie Chan after a long dry spell. It is, aside from two WTF plot points 90 minutes in, is one of his best films.

The film concerns Jackie Chan's inspector character from the previous films in the series, now a drunk. This is the result of run in with a gang of thieves who are more interested in killing and wounding police than actuallytaking anything. Chan's team is lead into trap and only Chan survives. A year later a young brash cop arrives to say that he's Chan's new partner and they are going to go back to work on the case that killed his team. Reluctant at first, Chan eventually comes around and the pair are soon back on the trail.

Bleaker and much more serious than most Jackie Chan films this is a movie thats clearly not for kids.(This was one of the films the signaled Jackies drift away from clowning) Sure there are laughs but the violence, especially in the first half, is shocking. There is an edge to it all, people will not be alright, if the amount of blood is any indication.

The action sequence are incredible and reminded me what can be done without CGI and rapid fire special effects. Its so nice to see real objects being swung about and smashed instead of what we get in Hollywood where everything is lets pretend.

The problem with the film is a break down in the films internal logic. It happens twice in a short span and serves only to further the plot, but at the same time it doesn't make any sense. The problem occurs an hour and a half in when Chan and his partner are arrested (don't ask) which leads to the pair being confronted by the bad guys while they sit in their cell. Neither occurrence makes any sense what so ever, however it does direct things toward the final shoot out which does make sense.

Absolutely worth seeing- for anyone who likes action or thrillers. Its a fine, though darker, return to form for Jackie Chan.
Posted by Steve Kopian at December 04, 2012