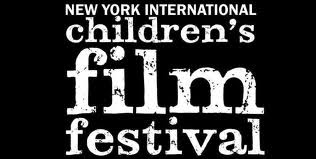 Once again the New York International Children's Film Festival is proving why it's one of the crown jewels of New York film festivals with the wonders they've screened this weekend.

I'll be doing a review this week but for now I do want to say that you want to hustle out tomorrow morning and see Ernest and Celestine. The film opened the film festival last night and it was a pure joy. Telling the story of how mouse, Celestine, met bear, Ernest, and came to live together. I'm not going to say much right now but the film is absolutely wonderful. How wonderful? I had a long conversation with Eric Beckman, the director of the festival, about the film. He's seen it several times and he still loves it, and having seen it I completely understand why. Go see this movie.

Today I spent much of the day at the SVA Theater....

The Day of the Crows is a stunning French animated film about a boy living in the woods with his father. The boy talks to the spirits of the forest, including his mother. His dad refuses to leave the forest, but when his father is injured in a fall the boy takes him to the local town and nothing is the same. While compared to the work of Studio Ghibli, the comparison is handy, but some what lazy. While it has similar themes and ideas Day of the Crows takes it into different and deeply moving territory (The only reason I wasn't crying at The end was I thought it was bad form to cry in front of the festival director who was standing next to me.) This is another must see when it plays again at the festival (It's also playing as part of Lincoln Center's Rendez-vous with French Cinema)

Shorts 2 is a uniformly great collection of shorts. Everyone of the films, except one, is worth seeing. I'll go into the individual films when I post a review in a day or so, but do make the effort to see it. (FYI: Siblings is the weakest film, it's problem is it tries to do too much in too little time)

The Heebie Jeebies collectionis ghoulish fun. A review is coming, but I did want to say that Swarming produced a deep visceral reaction from the audience many of which was grossed out. Yea you want to see that film and the collection if you can.

I had a ticket for Flicker Alley but by the time I got out of Heebie Jeebies I was all movied out.

Based on what I've seen this is shaping up to be another stellar year. Reviews of everything I've seen the last two days, plus Hey Krishna which is playing the festival will be up over the next few days so check back for all of the glorious details.
Posted by Steve Kopian at March 02, 2013

Email ThisBlogThis!Share to TwitterShare to FacebookShare to Pinterest
Labels: nyicff 2013