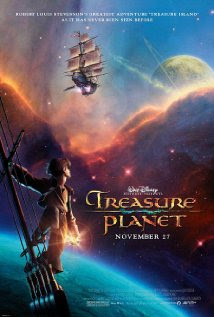 Wildly under appreciated Disney animated film that I vaguely remembe sending shock waves through the company because it failed so badly that Disney wasn’t sure what to do. I could be wrong, I but I remember no one liking the film and getting into arguments with people who really hated the film.

I personally think, that aside from a couple of odd missteps, this is one of the best animated films that Disney ever produced.

If you haven’t figured it out this is a science fiction retelling of Robert Louis Stevenson’s Treasure Island. It’s the story of Jim Hawkins and his friends who end up looking for lost treasure among the stars.

For me the film is a near perfect retelling of the story. Yes its set in the future. Yes the clothing is essential 18th century, but somehow it all comes together into a wonderful hybrid adventure of the sort they don't do any more.

The best thing in the film is Brian Murray as Long John Silver. Murray’s performance is so good that for the first time I seriously considered why there is no Oscar for best vocal performance. Murray’s animated Silver is the best attempt at the role that I’ve ever run across in any medium.  Yes it's only a vocal performance but there is something about the way the animators blend their work with Murray's work to create something truly special.

The two things that don’t really work for me are the updating of Hawkins in to a skateboarding kid, which while it allows for some great set pieces, but it dates the film unnecessarily and the other is Martin Shorts Ben Gunn who is a just a tad too out there. Other than those two small burps this is a great film.

Do yourself a favor and give the film a try. I know it has a piss poor reputation in some corners but it's a much better film than you realize.
Posted by Steve Kopian at March 14, 2013