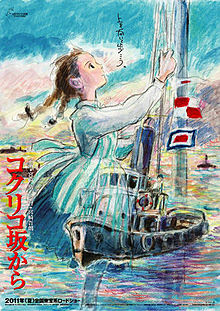 This review is based on watching an import  DVD of the import Japanese DVD. I have not seen the English dubbed version playing The New York International Children's Film Festival.

Directing a film that his father had planned Goro Miyazaki returns to directing with this adaption of the comic by Chizuru Takahashi and Tetsurō Sayama.

The story's set in the 1960s, not long before the Tokyo Olympics. The film follows Umi, a high school girl living in her grandfather's old home which is now a boarding house. One day Umi meets a boy named Shun who is the editor of the school paper when he pulls a stun to bring attention to the school wanting to demolish the club house where all of the schools clubs are located. The pair begin to grow close until one day Umi shows Shun a photograph of her father...

Amiable romance/drama/comedy is a solid film from Studio Ghibli. More akin to something like Ocean Waves rather than say Totoro. Full of great characters and wonderful moments (The film's occasional use of music is magical). Its a small scale gem of a film.

If here is a flaw it's that the film is so rooted in the Studio Ghibli style that it kind of blends in with everything else. There is nothing to have it stand out on it's own even if its story does.

One of the better of  the recent Ghibli films that actually works as a film where the sum of the parts is greater than each part separately. I say this because recent films like Ponyo or Arriety have these wonderful bits that never completely worked together. Something went boom at some point in the plotting of those films that doesn't happen here. This is a just a wonderful romance.

Definitely worth seeing when Gkids plays it this weekend as part of the New York International Children's Film Festival (all those screenings are sold out) or as part of it's regular theatrical run which starts Friday in select theaters.
Posted by Steve Kopian at March 12, 2013