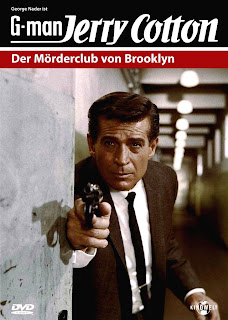 Rich men are being threatened for money. One calls the FBI who arrive to a fancy dress party. When armed men in break in they try to grab the daughter of the magnate, they get they wrong girl. The girl and phoney waiter who grabbed the wrong girl are killed and left in Central Park. When the right girl is kidnapped and the ransom isn't paid and the FBI are brought in the girl is killed. Similar things happen to other rich men.

My initial plan was to think this was a version or Kurasowa's High and Low but things go much darker as the bodies pile up (Say what you will the Jerry Cotton films are frequently brutal affairs even if there isn't gallons of blood- I mean in one film they abuse a small boy). Actually this is it's own story of a kidnaping and extortion ring.  On it's own terms the film is good but not particularly remarkable crime drama/ mystery (the end of the film is a typical I'll name the mystery ending).

As a Jerry Cotton film this is middle of the road.  Its not the worst, it's not the best.  The first film in color  I think the film is more interested in looking good. The New York City process shots that filled the first four films are missing from this film. There are some New York shots but not to the degree in the earlier films.(I should point out that the film uses the Main Post Office on 8th Avenue as FBI headquarters.)

Where the film shines is in the action set pieces. A chase through a subway (definitely not New York), a chase across a moving train and the couple of fight scenes are extremely well done. Yes they do involve obvious process shots, but they also involve enough real footage to let you know that the fake stuff only involves the stars.

Worth a look if you run across it or if you are going through all the Cotton films.
Posted by Steve Kopian at March 08, 2013