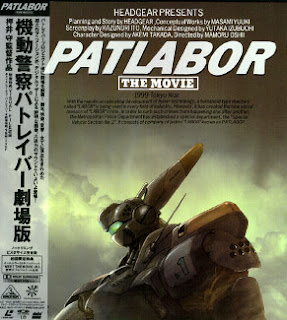 This is one of the DVD reviews I did for the long gone Animation on DVD website back in 2001 or 2002. I don't think this review ever saw the light of day, though I do know that it was submitted. I'm posting it here because I like the film and I don't want it to disappear forever into the void.


It begins with a haunting image- The suicide of brilliant computer programmer. Silhouetted against a deep red sunset, with birds flying all around , a bespeckled man steps to the end of a long gangway located
high atop a factory in the middle of Tokyo harbor and steps off....

It ends with the members of a Mobile Patlabor force in desperate battle not only for their own lives but also for the lives of everyone in the city from the madness that the programmer has wrought. The sequence is a
wonderful piece of action cinema as the small force attempts to maneuver around the seemingly deserted factory far from land just as a typhoon hits. This is what animation was meant to do, take you places that
regular film making can't go.

Labors are giant robots that are used for heavy tasks such as demolition and construction. The Patlabors are the police equivalent built to stop labors that have gone rogue either through programing or operator error.
However before you get crazy and scream that you hate giant robot cartoons understand that they only really show up in the last bit of the movie and are used because there is no other way to defeat the programmers endgame .

The PATLABOR series that inspired this film never relied on giant robot bashing into each other for ratings. The TV series was primarily character driven with the robots thrown in almost as an after thought,
or in this case it was the thing that set the series apart from every other police oriented anime.

The director of both of the PATLABOR films is Mamoru Oshii and it is he that is responsible for the success of the films and the vast improvement of the story telling from the series. Oshii began by darkening things up a few notches, both literally and figuratively. Gone are the bright blue skies that are my primary memory from the couple of episodes of the series. They are instead replaced with mutated colors, there doesn't seem to be any blue skies, except on the morning after the storm . You also can't get much darker than being trapped at night on a ghostly structure during typhoon.

Next Oshii takes away the ability for the police to arrive just in the nick of time or to be able to do just the right thing. In the movie doing the right thing often has consequences, as in how do you stop a raging labor with one of your best friends inside it with out killing them and yourself? Oshii also begins to weave in philosophical questions on the order of what is the role of technology in our lives ? How should be altering our surroundings? What if we create something we can't control? The use of the questions is two fold, first Oshii wants us to examine the questions he is posing , and secondly by posing the question he directs our attention away from the idea that this is just another light episode of the TV series. He taps into our natural
technophobia in order to use our fear to crank things up a notch.

Oshii also uses this ,and its possibly superior sequel, as a testing ground for many of the techniques that blew so many people away in GHOST IN THE SHELL. If you want to see where the style of that film was honed come back and watch the two PATLABOR movies. You would be hard pressed not to see parallels between the three films.

I love this movie. I love the mix of ideas and action. I love the fact  that despite all that is going on you never lose sight that this is basically a people driven story, its a person's fears and desires that set every thing in motion and it is a group of very frightened people who have to set it all right. This is also one of the few times when the makers of a movie took a series and improved on the source material in ways that are both beneficial to the film itself and the series. Imagine where the series could go now that its freed up of the lightness of the plotting that were the norm previously?

Even if you have never seen any episodes of the TV series I think you'll fall in love with the film. You really don't need to know anything since the movie pretty much explains it all for you as you go on. Yes having
seen an episode or two will allow you to pick up on who is who faster, but its not necessary.

The transfer is clean and free of flaws. It is nicely letterboxed to 1.85: 1 . The sound is good. The English track is particularly well done, the result of having been prepared for theatrical release in the early 1990's.

This is a great movie. Highly recommended especially to those who liked  GHOST IN THE SHELL or really good character driven films. This is one of the unheralded great films.
Posted by Steve Kopian at March 02, 2013