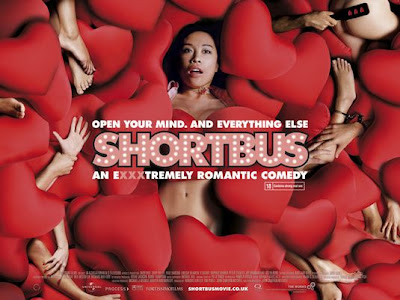 Therapist who's never had an orgasm takes the advice of two of her clients, a troubled gay couple, and goes to the sexually oriented club Shortbus where Justin Bond plays master of ceremonies.

The problem for me with the film is that had the sex not been real this film would have been lost in the "indie" market. Its not that there is anything wrong with the sex, theres not, its just that ultimately if you removed it the film has very little to make it stand out from all of the other indie films about relationships that come out.Okay, thats not wholly true, since there is some witty exchanges, some heart felt emotions, and some really good performances, especially by Justin (Vivian) Bond (and the score is kick ass).

I think the problems, for me at least, are three fold.

First, a good deal of the film looks like many other indie films. To be certain it does have some nice flourishes, but not enough to set it apart. If it weren't for the sex I don't think the film would have gone anywhere.

The problem (and this is the third major problem) is that the central character isn't very believable. How does this woman have any clients when its clear-as one character says before getting punched in the face-that she isn't a good therapist. She comes off almost as Lucy (as in I Love...)Part of the problem is the actress playing her. She's not bad, but I think she would have been better in a complete comedy, rather than here where the humor and drama mixes since she seems simply confused by everyone and everything.

I am left baffled by the ending, which seems to suggest that multiple partners may be the way to happiness (though to be honest by the end I really didn't care enough to keep watching it with my full attention so I probably am missing the point.)

The sex is what it is, mostly un-erotic, though I'm sure the people on screen were enjoying themselves. As graphic sex in mainstream pictures go this is probably the most superfluous. In most other films that have used graphic sex for a reason. For example in In the Realm of the Senses it heightened the stakes and showed how far the couple was going, and in the uncut version of Thriller:A Cruel Picture (aka They Call Her One Eye)  the graphic rape is squirm inducing since its a punch in the face with each thrust, it was uncomfortable but there seemed to be a reason for it. Here you could do away with it and it wouldn't make a bit of difference.

Not a bad film, but not a great one either.Its just sort of an okay one that, like a naughty cheerleader gets noticed simple because it takes off its shirt and shows us its tits.
Posted by Steve Kopian at March 01, 2013