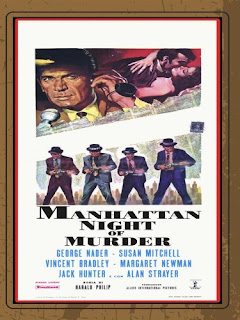 Second film in the eight film Jerry Cotton series this is an odd mix of things that work and things that don’t. However unlike the first film, its clear why the series continued on past this point.

The plot of the film has the Hundred Dollar Gang shaking down merchants in a portion of New York. They want 100 buck payment or else they’ll break up your place. After his grandfather is shaken down, a little kid follows the bad guy around and witnesses a shakedown gone wrong. When the owner of an Italian restaurant refuses to pay his place is trashed. During the trashing someone shoots the owner, no one is sure who, however the kid saw who it was. The gangs boss wants no witnesses and he puts a hit out on the kid. The murder begins to heat things up and Jerry Cotton arrives just in time to save the injured kid from death.

A rather simple plot, you could probably cut it all down to a 20 minute plot heavy film, is expanded by several set pieces and lots of footage of New York and the FBI. It’s a super breezy tale that moves along like the wind and isn’t particularly taxing. The strength of the film, the set pieces and the Cotton character overcome the over use of FBI lab montages, street scenes and minimal plot.

The set pieces are frequent and extremely well done. There is a chase into a power plant that was clearly done on location, another sequence has Jerry trying to rescue a man from a bomb set to explode if a door opens, another fight has Cotton and a hood fighting over the tanks in the Mermaid Club. All of the sequences are great fun and even when the plot seems to be spinning its wheels you keep watching because you know there is a fight coming just around the corner.

The Jerry Cotton character is really cool. A less cold and distant cousin of James Bond, Cotton is a can do guy. He has this wonderful can do attitude and a genuine never say die attitude. As Cotton says in one of the films after freeing himself from a villains bonds “see it never hurts to try”. Cotton’s character is also rather asexual. Yes he chats up the ladies, but where other spies and agents are constantly putting moves on the ladies, Cotton keeps everything friendly, but professional. Also cool is Cotton’s unflappability, nothing throws him for a loop, even being attacked by a whole gang of guys, Cotton knows that he may get caught but he won’t stay that way. And amazingly no matter what he does his suit looks perfect.

Based on the films I’ve seen I could completely understand if J Edgar Hoover liked the series because the films make his agents look incredibly cool.

(While I love the Cotton films for their copious use of actual New York backgrounds its clear that the makers of the film have no understanding about New York City. Not only do they jumble shots of streets, but they also use of highway interchanges that are not part of New York, shots of Wilshire Blvd in Los Angeles, and have the action taking place at an intersection that isn’t anywhere in New York. New York lovers are going to be rapturous at the shots of old New York and in hysterics at the mistakes)
Posted by Steve Kopian at March 05, 2013