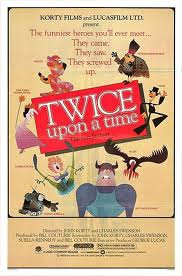 Legendary cult film was produced by George Lucas and despite the best efforts of everyone involved the film never was really released to theaters and only really developed it's following thanks to cable airing and home video.

The plot of the film has Ralph the all purpose animal (he shape shifts) and his friend Mumford trying to save the world from bad dreams which the head of Muckworks wants to give everyone. There's much more to it than that, but to be honest as interesting as that is, the more intriguing bits are the history of the film and the look of the film.

Made using essentially a cut out technique with the everything being animated on a light box this film has a truly unique look. The technique called Lumage allowed for some interesting effects when images could bleed through each other thus creating some striking images. How striking? take a look below: 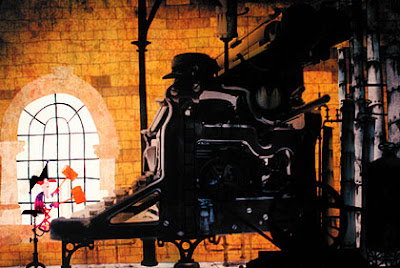 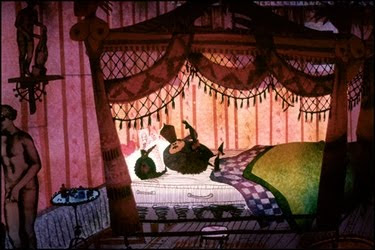 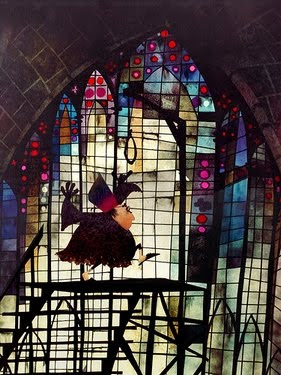 No one ever really was doing anything approaching this sort of look. Its a look that may have been tried for a short here or there but certainly not on a feature scale.

I remember reading about this film for a long time before it was released. The big reason the film was getting notoriety was simply that George Lucas had seen some of the the tests and had agreed to produce. Anything that Lucas touched at the time seemed to be gold, unfortunately the film kind of went sideways and a combination of a failing distributor and many people not knowing what to do with the film I don't think it ever got much of a release.

I do know that the first time I saw the film was when I stumbled upon it on cable back in the 80's. I had no idea what the hell I was seeing. I know that it impressed me visually but the story kind of confounded me (though before you jump to conclusions it was years before I ever saw it from start to finish- for some reason I never managed to record it.) I know the film always amazed me in that I never could understand how anyone would allow this to get a "big studio" release, since it was far in look and feel than typical animated films, even something as "odd" as say A Mouse and his Child kind of fit the typical Hollywood slots better than this.

Anyone who loves animation or really cool looking visuals really must see this.

As for anyone looking for a great story, it's not bad. There is enough there to carry the visuals along.

I like this film. I just wish the various legal problems could be sorted out (the minds behind the filmare battling each other over amongst other things which sound track is the right one) and this could get a real release. There is something special about this gem of a film and it deserves to be rediscovered.
Posted by Steve Kopian at March 13, 2013