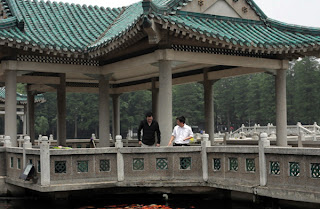 This doesn’t resemble a film, so much as a test film for a larger project. Actually what it looks like is a version of a film I submitted in college that almost kept me from getting my BA, but that is another story. It's actually the first time that I ever fell asleep in a festival or press screening (and fell asleep I did, several times during the course of the film)

The film is based on 3 chapters (9,10 and 11) from the Journey to the West in which the whole larger story is set in motion. Here the Emperor is approached by the Dragon King who wants his help in keeping his head with a matter in the heavenly court. The Emperor fails and the Dragon King loses his head. He then haunts the Emperor who dies and goes to hell.

A modern dress minimalist version of the story where some of the story is told via photos and text, this is 15 minutes of screen material padded with an hour of static shots and non-performances. Do we need to watch the calligraphy being done silently for five minutes? No do we need the long ride in the country at night? No. Do we need the news footage of the flood?No. Do they translate any of the on screen calligraphy and text? no.

There is a film here, just not a 70 minute one. I mean the film does work in bits and pieces, the modern dress is a cool idea and the dead pan humor is often very funny, but almost nothing happens.