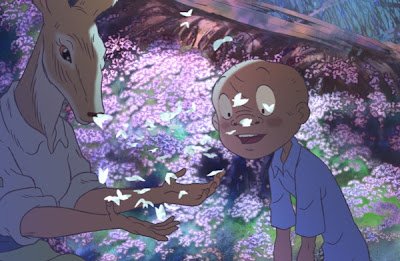 You're going to hear this compared to the work of Studio Ghibli- forget it. This may play in a similar field but in reality when the film comes together it reveals itself to be it's own powerful tale.

The story follows a young boy only known as Son who lives in the forest with his father. His father is a tough man who teaches his son that there is nothing outside of the forest but the World Beyond. He warns him that should he ever go outside it he will disappear. Son is content to follow his father's instructions until seeing people in the fields outside the border makes him wonder. He lets it go until his father is badly injured in a fall and the spirits of the forest who are is friends tell him to take his father out into the World Beyond for help. This sets in motion a chain of events that will, of course, change everything forever.

You gotta stay with this film for a little bit. It's not that it's bad, it's more that it seems to be going in different directions, with it's various animation styles, (some realistic,some anime like, some cartoony) and magical realism colliding with seeming out right fantasy which makes for a weird mix. There is a point to it all and if you can hang in there you'll be greatly rewarded. By the time the end came I was welling up with tears and had I not wanted to talk to the head of the NYICFF with red puffy tear filled eyes I probably would have been out right crying from the bittersweet ending.

I love when a film upsets my expectations. I love it when a film reveals itself to be fully in control of what it's doing. I love when a filmmaker seems to go at the end "and you thought I didn't know what I was doing..." which is why I love The Day of the Crows. Its one of those films that doesn't do what you expect, and is so much better than you could ever have hoped.

The film seems to be ripping off the Ghibli canon, but this is darker territory. There is death and damage. People are truly broken individuals who aren't always put right in a story book way, but in a real way that comes from losses too deep and pain somewhere past enduring. I can't remember Miyazaki ever having people this broken in his films, nor such careless violence (There is a point to it) or even violence in his films. I know I've never seen any children run out of a Ghibli film out of fear, and that happened here as several younger kids left upset by some of the darkness.

This is a great great film. As of right now it has no US release planned so you really need to get to any of the screenings at the NYICFF or Rendez-vous with French Cinema because this is something you want to see.  This is one of those hidden gems that this website was started to highlight. 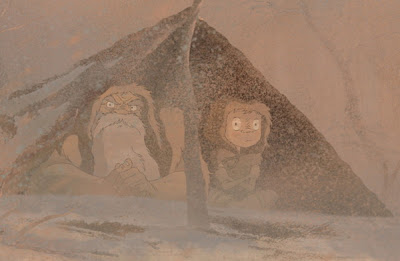