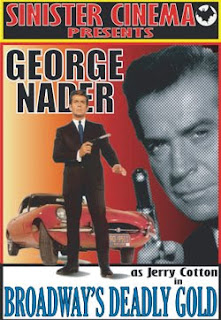 The film opens with a truck racing through the New York waterfront. On the radio we hear the report of a daring gold robbery.  The man backs the truck up to the waters edge and dumps the gold in the water. As he is making his escape, he's cornered by crook Costello and his men, they machine gun the fleeing man (who is actually an FBI man who infiltrated the gang) who, though wounded returns fire. However before the police can arrive he's finished off.  The police arrive and scoop up the gang.  At the funeral of the FBI man Jerry Cotton arrives and meets his boss who tells him the story and adds that Costello was broken out of jail by other crooks wanting the gold.

Last of the Jerry Cotton films is a round and round as everyone tries to deduce where the gold is. The dying agent mails the location to his girlfriend- however no one knows that until the second half when the film shifts to a get the key chase.

Assuming you don't look at the plot too closely, (frankly much of it is killing time) this is one of the better Jerry Cotton films in my humble opinion. What I like about the film is that it keeps moving, yes in circles, but it never bogs down. I also love that the film is full of action and beautiful women. Almost everyone is armed with a machine gun and Costello is an expert with grenades so lots of things go BOOM.

Yes the film is full of silly moments, Costello is broken out of a police van with much too ease, he wakes up from plastic surgery with a finely cropped beard and mustache, the grounds of the grave yard of Trinity Church in Manhattan seem to have been made by the Timelords in Dr Who since it's tiny confines hide a huge rambling expanse of graves and then a car blows up in a huge cataclysmic ball of flame people stagger out dazed but un-singed.

I really like this film a great deal and wish that the series didn't end here because Cotton was and is a great action hero. I'm impressed that despite it all none of the series are really bad, simply weaker when compared to others in the series. The best thing I can say is I'm ready to go back through them all again.

(Clever people will notice that the Cotton series has 8 films in it and Ive only reviewed 7 over the last week. I would have reviewed all of the films but as of this writing I still haven't tracked down Death in the Red Jaguar yet. When I do you can expect a review.)
Posted by Steve Kopian at March 10, 2013