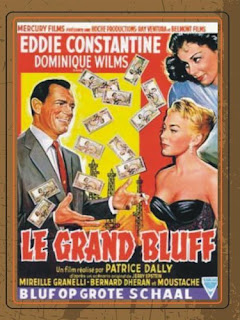 Eddie Constantine plays Eddie Morgan, a charlatan and gambler who meets a girl...well two, talks his way into a hotel suite and finagles a deal involving oil wells in France. Its a comedic romp where we actually get to hear Eddie's voice singing, despite all of the dialog being dubbed.

A kind of throwaway film is ultimately bubble gum for the mind, if you have any doubt about how serious this film is stay all the way to the end and watch Eddie address the camera directly.

The dramatic thrust of the film is whether or not loveable crook Constantine and his lady friend, who has the rights for oil drilling, will be swindled by a bigger bunch of crooks, namely big business. While the film generates some suspense the fact that everything is so breezy prevents any real tension from occurring. Normally that would be the kiss of death for a film, but here in the Big Bluff it’s perfectly fine since it allows for us to get carried away by the humor and nice characters, such as Eddie’s right hand man Mustache, who is charming.

For me the film scores simply because it’s just so much fun, much like an mindless evening hanging out with your best buds. While the film probably isn’t the most memorable film ever made, hell I’m having trouble writing it up a couple of hours after seeing it, I know that the smiles of the good time will linger.

Worth seeing if you should run across it.