Suicide Shop at Rendez-Vous with French Cinema or explaining how difficult it is to give you 365 good movies a year. 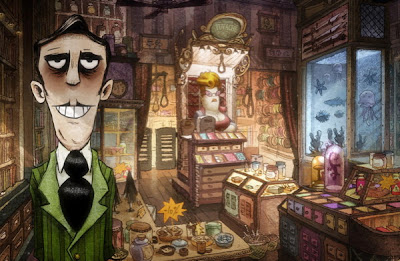 The idea behind Unseen Films was to highlight good movies you probably don't know about. Occasionally we'll take a side road to warn you about something really bad, or we'll take a break with the Turkey week celebrations. Mostly though we try to only talk about films we think you might want to try for one reason or another.

The out right exceptions to the only good film rule are film festivals and press screenings. As far as I am concerned if I see something at a festival or at a press screening I'm going to review it good bad or indifferent since odds are it's not something you'll know about. That's my personal rule and it doesn't apply to everyone else here at Unseen who are pretty much given free reign to review things as they see fit. Some times they just don't feel it and they don't write- I on the other hand will, as Chocko has said, review anything...

...well not anything. There are literally hundreds of movies I see that never get mentioned at Unseen Films. For every film reviewed I probably see on average, three or four others. One of the reasons I work so far ahead (I'm into the end of June programing wise plus the Turkey Week is done) is because I can go for days or weeks without being able to write anything up or seeing anything good. Occasionally I'm saved by a film festival or a press screening, but more often then not I'm fumbling around looking for something good to write up- Now if I was doing everything I saw I could program the blog for years ahead, but I don't do that , I just want to write up the good stuff... 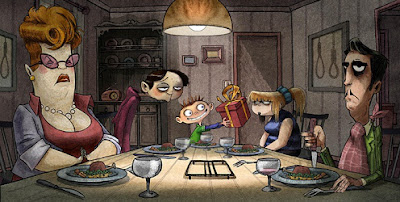 Which brings me to The Suicide Shop an animated 3D musical from France directed by  Patrice Leconte the man behind Man on the Train, Intimate Strangers, Girl on a Bridge and Monsieur Hire dark dramas with real people. To say that Leconte mostly missteps is being kind. To be completely honest had this not played at Rendez-vous with French Cinema I would probably never have mentioned it at all (well one thing would have gotten mentioned, but I'll get to that)

The film is based on a black comedy novel from 2006 about a family that runs the title establishment. They help people put an end to their lives, something the recent economic down turn is making a frequent occurrence.  (By the way everyone is named for someone who committed suicide with the father's name being Mishima). Into their gloomy lives comes Allan (Alain in the novel), a naturally happy young boy who's happy attitude disrupts the status quo and makes everyone wonder if they are in the wrong business.

This was made in 3D, for reasons that completely and utterly elude me. This is the case of 3D craze killing a film. If it's possible for a film to look flatter in 3D than 2D this is it. I was so frustrated by the 3D that I took off my glasses and simply watched the projected image. I know you're thinking I'm crazy because the image is blurry, with good or aggressive 3D it is, but with this film so little is in 3D much of the movie, subtitles excepted, was unblurred and hence not in 3D. (By the way the glasses completely wipe out all of the brilliant colors in the film)

The music in the film isn't bad, but completely and utterly wrong for a film of this sort. The songs seem to have been written for the stage as either show stopping solos or as big musical numbers. None of the songs get proper direction (as show stoppers of the right sort) and fall even flatter than they should in the context of the film.  The number on the school bus is a down beat showy number that just has the kids on the bus singing. The number by the shrink has him wheeling around huge empty expanses.  With rare exceptions if you're going to have your characters burst into song you have to go big, that isn't what happen here, they go small and the film stumbles.

The story told here is very scattershot and there have been some changes from the source. I know things like the novel's near apolcalyptic setting that brings on the customers depression is gone, it's simply bad economics driving the suicides. Worse the pacing is off and things get left behind. You can feel the film taking it's time for much of the first hour before rushing to a conclusion in the final twenty minutes. Things are so rushed that where you get to know almost every character some what, we never get to know older brother Vincent who never arcs, he just sort of is. The story's plodding nature in the first hour is so bad that we get repeated numbers and sequences where we watch the customers shop for a means to their end. Its amusing the first time or two but they just repeat it over and over again which becomes deadly since it takes away from the characters which are slowly developing.

There some good things here, the look is great and I like that the film is very dark even in most of the funny moments. Personally I think that if someone could go at this with a pair of scissors you could get a great 20 or 25 minute movie out of it. If you went back and redid it completely you probably could get a whole feature out of it.

Now at the top of the review proper I said that while most of the film never would have been mentioned here at Unseen one thing would and that was the handling of the daughter Marilyn. Marilyn is a chunky blonde girl who wants to kill herself, that is until Allan tells her she's beautiful and buys her a  scarf to kiss her neck for her birthday. The arc of her character as she opens up is beautiful. It.is possibly one of the best character arcs I've seen in any film in a very long time. The sequences of her dancing in the window as she's watched (unbeknownst to her) by Allan's friend's is amazing in making a statement for beauty in all it's forms. Even better is the boom box car sequence which has Marilyn literally bouncing into dancing and into the arms of a stranger. Not only is it some of the best character animation I've ever seen (no really it is - just freaking watch how she moves and her expressions) it's also amazingly romantic. These two sequences saved the movie for me and made me aware that with a better script and better direction this movie could have been something truly great instead of just okay. 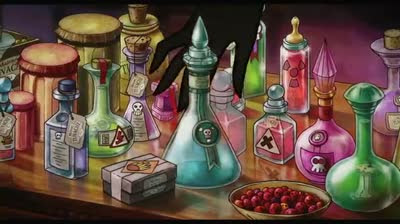 I don't think it's worth spending money to see this in 3D, but if you get a chance to see it say on Netflix, do so but only for the sequences with Marilyn.
Posted by Steve Kopian at March 09, 2013