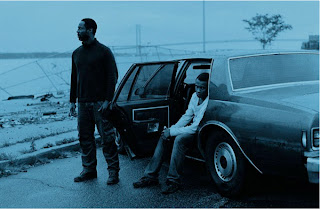 Based on the Beltway shootings this film follows a young man named Lee who is meet father on the run John in Antigua. John brings Lee to the US. John in showing Lee some attention is the father Lee never knew (John actually literally saves Lee from drowning). As a result Lee willingly follows his father as he spirals down the dark path toward serial murder.

Positing that we can never know or understand why even if we are told the reasons (Lee says as much in one of his very few lines of dialog at the end) the film simply shows the two men wandering around , at first doing nothing but fuming about past wrongs and how women are no good (well John fumes, Lee remains deadly silent throughout-he says almost nothing for the entire film) before they take their act on the road.

This is a good looking film that has some good performances and little else. Confusing silence for deep meanings this is film where nothing much really happens but the director wants you to think it does. Any and all emotion is driven by the over bearing score which tells you exactly what you are supposed to feel. As I’ve said our main character never says a word and remains a complete cypher. John simply talks about all that is wrong with the world. These aren’t characters they are voids. This may be the intention but it makes for far from compelling filmmaking. It’s all one note.  Frankly if the film wasn’t so good technically, thus allowing it to seem better and more important than it is, this film would never have been noticed by anyone. Personally I don’t know why New Directors noticed it because not only isn’t it all that remarkable, and far from deserving of the opening film slot.