It's not why doesn't Oscar notice horror, it's why isn't horror making Oscar worthy films? 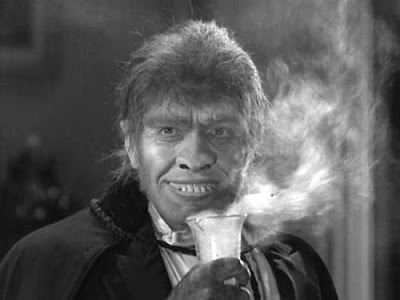 Last Sunday there was a thread floating across Twitter that the Academy Awards should honor horror films. Many seem to think that Oscar has unfairly ignored horror. In a discussion with Peter Gutierrez and Paracinema writer Lab Splice it was suggested that horror should try to track the course of Westerns into finding acceptance. I don’t think that’s possible since the horror genre is always going to be a difficult one for mass acceptance. Let's face it some people just don't like horror films. Ultimately though, I don't think the question of Oscar going gaga over the horror genre is a matter of acceptance, I think it's something else entirely...

Okay let’s clear something up at the start- Oscar hasn’t ever ignored horror. Even outside of technical awards horror has gotten Oscar's notice. Fredric March won for Dr Jekyll and Mr Hyde, Ruth Gordon for Rosemary's Baby, Jeff Goldblum got a nomination for The Fly, The Exorcist got a boat load of nominations including Best Picture and Silence of the Lambs won a bunch of them including Best Picture (And yes Silence is a horror film all you need do is compare it to any number of mad killer films).

Now at this point, before I go further I have to state something that will be obvious to anyone who reads Unseen with any regularity- I love horror. I grew up watching it with my mom from the time I was a baby. I’m not an outsider looking in, I’m a member of the tribe…

…and that’s the problem most of the films that are being released are the sort of things that only members of the horror tribe are going to love... and maybe not even then.

Think about it, when you're  talking about horror today, or even horror for the last sixty years you’re talking a genre that largely dwells in the exploitation ghetto. Most of the films that are churned out fast and cheap. More often they not they are technically weak. Today they are often bloody affairs with mad slashers and monsters, two things that  now symbolize the genre  (as does the inevitable twist ending which at this point is so ingrained into the mix that the real twist is when there isn’t one). They are NOT being made for everyone, but they are being made for the core audience of horror film lovers (why else do we get multiple Halloweens, Texas Chainsaw Massacres, Saws and any other title that goes beyond a single film).  It’s a genre that is full of direct to video and low budget knock-offs that flood the market and make the cache of the good films so much less. You won’t believe how often I have to twist the arm of people to  watch a horror film because there are so many bad films that many people feel the genre is the home of mediocrity. People are genuinely surprised when a horror film actually is good.

In all honesty the vast majority of horror films today are being made by a cliché filled check list that is so well worn that they aren’t scary but weirdly comfortable. In this respect they exactly mirror the program westerns of the 30's, 40's and 50's, but with gallons of blood.

Lab Splice has argued that horror should go the way of westerns to gain respectability and eventually an Oscar. The trouble is that the genre, especially as it’s evolved over the last 60 years has devolved from something everyone would at least try and turned into a specialized field that most people feel is just blood and guts and in many low budget cases tits and ass.

The big difference is that westerns never were as all over the place as horror. If you take a sampling of programed horror films from the 30’s and 40’s you’d have plot lines that go all over the place and drift into thriller, science fiction, supernatural and any number of other sub-genres including westerns. With Westerns things are much simpler. The vast majority of the films either involve something involving settlers and Indians or some variation of a crime story involving robbery, strong arm tactics or land theft. To a certain degree the genre became so common place that it became dramas in western dress up. You can’t do that with horror-though American Horror Story is making a stab at it (and if you did make it like westerns and make things dress up, odds are you’d end up killing it as the exotic nature of the horror is made common place and unfightening- Dark Shadows anyone?)

Secondly horror fans are going to have to start to get the good and great independently produced films noticed. I say this because I really feel that the best hope of a true horror film ever winning an Oscar will come from and independent producer.  The independent producer is going to be the only one who isn't going to kowtow to a corporate mentality that strips the genre of real originality.  Worse, odds are any project that starts as a big studio film will be pecked to death by people offering advice on how to make the film better or turn it into a series.

As fans anyone wanting to get a genuine horror film as Best Picture you're going to have to go out and trumpet whatever film has a shot at winning. I say this because as with so many independently produced films no one is going to notice unless people make some noise. This is especially true since so many BAD horror films are being churned out no one is going to notice a good film unless people start talking about the good ones- and doing so on more than just the horror websites and message boards.

As I said at the top it's not that Oscar won't notice horror, it's simply they won't notice until horror filmmakers make something genuinely worth noticing and the fans tell the world it exists.
Posted by Steve Kopian at March 03, 2013