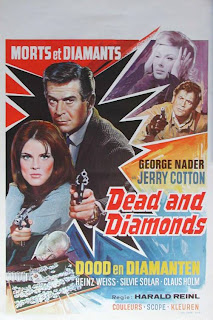 It begins with a gang stealing a large bottle of poison gas by blowing up the manufacturing plant as a cover. If you think that's extreme consider that the gang ends up machined gunned by their bosses since that's the sort of guys they are, and their leader Stone, wants no witnesses.

Cotton enters the story when he's called upon to take the place of a safe cracker who has been brought from England to work for the gang. They need him to dismantle some burglar alarms. Its a cat and mouse game as Cotton tries to figure out what the crooks are after and who the mastermind is.

While one of the best made and best looking of the Cotton films this is one of the least in the series. The problem is that out side of the opening robbery, Jerry stopping t a car of crooks in an Oh Crap! method and fiery escape there isn't much in the way of action. In a weird way this is a kind of inaction film, especially when compared to the other films in the series. Imagine that if you put on the newest Die Hard film and found that Bruce Willis spared with the bad guy for most of the film and only fired one or two shot in the whole thing. You may have a good film , but it certainly isn't a Die Hard film.

Death and diamonds isn't a bad film, its just not really a Jerry Cotton sort of one, even if he's in this one the most of any of them.
Posted by Steve Kopian at March 09, 2013