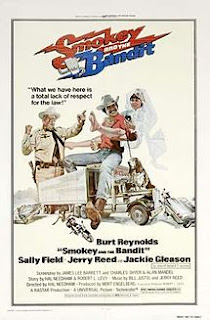 I saw Smokey and the Bandit as part of a super bargain double feature with Sgt Pepper’s Lonely Hearts Club Band. By the time I had seen the film in a theater I had already seen it numerous times on cable TV. It was a different experience seeing the film on a big screen with an audience that was into it than it was sitting at home on the couch.

The film tells the story of Burt Reynolds and Jerry Reed who take a bet from Pat McCormick and Paul Williams to go to Texas to get a tractor trailer of Coors beer and return in 24 or 28 hours. At the time it would be considered bootlegging since Coors couldn’t be sold east of the Mississippi. After they pick up the beer a movie long chase ensues as Sally Field is picked up and Jackie Gleason gives chase.

The height of redneck cinema of the 70’s this is a film that made Hal Needham briefly a hot director, shot Reynolds even farther into the stratosphere (as it short circuited his ability to play serious roles) and made good ol' boys briefly bankable. The film for better or worse changed the cinematic landscape as producers tried to copy it, or copy what they thought was it’s formula. As a cinematic force I’m not sure it was a particularly a good thing. Aside from producing some laughs and really putting Sally Field into the realm of being a bankable actress (something that Sybil helped  with as well) I don’t think the film gave us anything good.

The film works because Reynolds has rarely been as charming and Jackie Gleason is the perfect foil. While they only fleeting share the screen one can’t help but feel the antagonism between the two. Their verbal sparring is sharp and witty and damn funny, even after you’ve heard it literally 100 time before.

The film is essentially an hour plus long chase as Reynolds tries to out run Gleason. Gleason is a bigoted moron with a badge and we enjoy his deflation not so much by the Bandit, but by circumstances. Everything bad that happens to him is the result of him being too stupid not to do it. Reynolds is just the excuse  for him to reveal himself.

Sorry I'm over thinking this film

Simply put this is a great non-taxing film. Its the best film Hal Needam ever did and way better than you think it is.