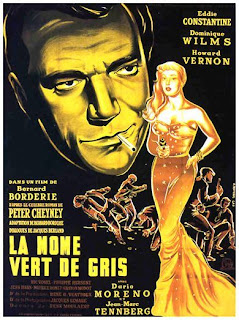 First outing of Eddie Constantine as Lemmy Caution. It was a role he would return to again and again over the next several decades. Constantine was an American who lived in France and became a well known singer and actor. He was often way better than his material which he lifted up just by his meer presence. Here he staggers through a middling mystery with such bravado he managed to influence film history.

The plot of the film has FBI man Lemmy Caution flying to Casablanca in order to investigate a possible gold robbery. Along the way he runs smack dab into murder, bad guy Howard Vernon and a dame who looks a great deal like Lana Turner or perhaps Veronica Lake.

For me the plot really isn't the point. The point is Constantine chewing scenery as Lemmy Caution. There is something so incredibly cool about Constantine that makes you forget that the plot drifts in and out or that the film is dubbed oddly. For me Caution is as cool a character as you can get and while Jean Paul Belmondo is said to be aping Bogart in Breathless, if you watch Constantine playing Lemmy you realize that he's also stealing from some one else. (And it isn't surprising since Godard did make a Caution film- with both Contanstine and Howard Vernon- Alphaville.)

It's clear why the character continued on for the next 40 years in the person of one man (according to IMDB there was one earlier Caution film with someone else in the lead, but after this film no one but Constantine played him.).I know some people complain that Constantine eventually walked through his portrayals of Caution, but having seen several of the films, sometimes its damn hard to make something look tossed off.

Poison Ivy is an entertaining film. And should you run across it, give it ago.If nothing else you're seeing the birth of one of the coolest screen characters ever.
Posted by Steve Kopian at March 17, 2013