Who's afraid of Song of the South? And other Forbidden Disney Stories 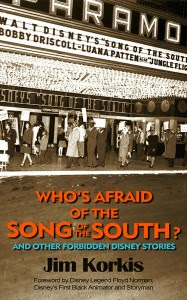 If you want to know all about the making of Disney's Song of the South, you really need to pick up the book by Jim Korkis. Its a wonderful book that goes into the making of the film and explains how the film was essentially doomed from the moment they picked a screenwriter.

Korkis tells the story of how Disney wanted to make an animated film from Joel Chandler Harris's classic stories. The problem was that as the Second World War ended the Disney Studios  were short of cash, since they had been so focused on military films they couldn't turn out animated features until the studio reset itself. Since they couldn't afford to do a full length animated film, Disney decided to make the film a combination of live action and animation.

Hiring Dalton Reymond, someone who never wrote a screenplay, and who had his own very peculiar view of the South essentially doomed the film since what he was doing was going to be seen as racist..

Not happy with the script by Reymond, which was not very good, Disney brought in several people to try and shepherd the script into a workable form. Unfortunately Reymond's biases in the script were picked up by one of the additional writers who was asked to work on the project. Horrified by what he saw as racist portrayal of blacks he began a letter writing campaign and thus assured the film as being seen in America as being racist even before the script was finished or a rame had been shot.

There is much more to the story and Korkis tells it all with a clarity and directness that is missing in most other film books. Korkis tells us what happened and why and makes it damn interesting.

Set sometime after the Civil War the film has young Bobby Driscoll sent away to live with his grandparents on a plantation. While there the boy meets Uncle Remus who tells the boy about life via his stories of Brear Rabbit, Fox and Bear.

The live action sequences are insufferable. Sweet saccharine and completely unreal, the sequences seem to drag on and on forever. The look and feel of the sequences are stereotypical Hollywood Old South. They look and feel more like slave south than free south and in many ways I can kind of understand why people are upset by them, but at the same time they are so awful and beneath the animated bits that odds are no one who sees the film today is going to care much. Indeed when I do watch the film I completely skip them (I’ve learned my lesson after repeatedly trying to do the impossible and watch the film straight through one time too many)

The animated sequences on the other hand are damn funny. Braer Rabbit turning the tables on his nemesis never fails to make me laugh until I hurt. Say what you will about the dialect they are speaking, he humor of them is masterful.

In all honesty had the whole film been animated and just the animal stories I think an argument could be made that it might have turned out as one of the best animated films ever made. As it stand s now we have great animated sequences tied to crappy live action ones

Getting back to Korkis's book, talk of Song of the South only fills just over a hundred pages of the book. The rest of the book is full of other Disney stories including films on menstruation, venereal disease (with talk of gay sex),Walt’s idea to have Mickey try suicide, Tim Burton’s unhappy time at the studio, the removal of characters from Fantasia and the infamous orgy poster from the Realist, which is claimed to be one of the most pirated pieces of art ever (that last chapter also explains why, as much as they don’t want to, Disney and other big companies will sue day care centers for using unofficial art- because if they don’t sue everyone they’ll be unable to sue the people who need to be sued)

There are tons of other tales at well that branch off from these wonderful stories.

I love this book a great deal. It collects some of Korkis’s reporting from Hogan’s Alley, where I first read of some of these stories, and adds additional material to them to put a wonderful spin on the Disney films we’ve all grown up loving. Its nice to have the films brought down to earth and dirtied just a little bit. Its nice to see that the films were made by regular joes and not a cold impersonal corporation that makes everything over in a saccharine mold.

Worth tracking down. (To purchase a copy at Amazon go here.) 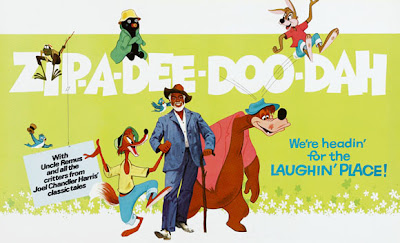