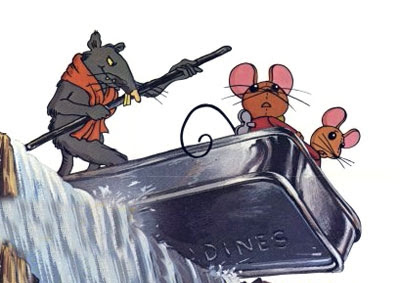 This heady anti-Disney film was released in 1977 when animation didn't all look the same and there were no computers in sight (The first computer animated big budget film would be Lensman released in Japan in 1984).

The Mouse and His Child tells the story of a wind up toy mouse and child who are attached to each others mands. Not long after they are unboxed in the toy store they accidently fall into the garbage. they then end up in the cuty dump where they are rescued and put to work by a rat in his casino. When warfare breaks out between rats they manage to escape and go on a quest to become self winding...but the rat wants them back and he pursues them.

Looking unlike any other animated film, it looks hand drawn, the film is based on a novel by Russel Hoban. Its a dark film full of philosophy about life and existence that is so completely unlike anything you see today that if you showed it to most kids now they wouldn't have any idea how to react to it. Its decidedly way more adult than anything out there now, at least being released by American studios. I've often said one thing I like about the Kung Fu Panda films is their philosophical bend, but they are nothing compared to this.

Do I like the film? I really have no idea. 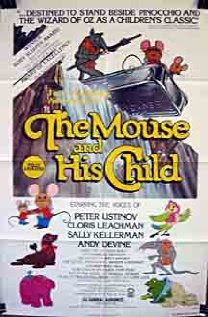 Watching the film again for the first time in years I was struck by how much better it was than I had remembered it to be. Its a film with real animation that was clearly lovingly done by the animators. Its a film that is dark and dirty and aside from the anthromorphica animals and toys is rather realistic. I like that it assumes the audience can handle what its throwing at them and that it doesn't talk down to anyone.


On the other hand it's a dark and somewhat unfriendly film. I know of several people who had nightmares after seeing it when they were kids.

Reservations aside this is a unique treasure of American animation. Its a film that was made to tell a good story and it wasn't afraid to do it the way it felt it should. I can only imagine how this would look today with bright computer generated colors and the need to be laugh a minute and squeaky clean lest parents and their evil groups get up in arms.


To the best of my knowledge the film has never been officially released on DVD, it can be had on the collectors market and it is up on you tube and is worth tracking down.
Posted by Steve Kopian at March 11, 2013