Brit Crime: Better on TV or Film? ‘The Sweeney’ and ‘Thorne’ Provide Clues 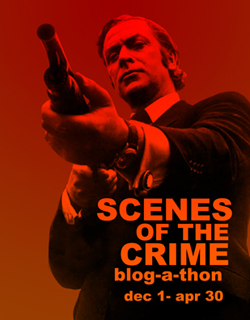 …and why, may I ask, shouldn’t Brit crime thrillers be insanely popular in the US? Okay, maybe not insanely—not like Downton and Moffat’s series, but distinctive enough to have their own mass following, the kind that sends mobs to theaters to catch The Sweeney today, its opening day in theaters, or to retail outlets to pick up the six hours of Thorne that become available on home video next Tuesday.

Certainly the success of Luther on these shores, and the availability of many other recent great and near-great Brit TV series on Netflix and Hulu, should have been priming the pump. Ironically, though, it may be the success—and yes, insane success, as evidenced by the start of the second half of its fourth season—of a US horror series that accounts for any spike in disc sales for Thorne; I’m thinking of course of The Walking Dead, whose dastardly “Governor” is played by David Morrissey, the same veteran actor who portrays DI Tom Thorne. Certainly the two mini-series releasing next week, Sleepyhead and Scaredycat, work so well in no small part because of Morrissey’s skill in bringing such a dimensional character to life: neither quirky, overly intellectual, or facilely brutish, Thorne-the-man is refreshingly free of easy gimmicks. Morrissey brings a Neeson-esque combination of brooding gravitas and well-spoken charm to the role, and he is more than ably assisted by a nicely directed supporting cast. Aidan Gillen, always an interesting, if not absorbing, screen presence, and Eddie Marsan, part colleague/part rival, are two of the standouts in this respect, and they help male Thorne so very watchable. 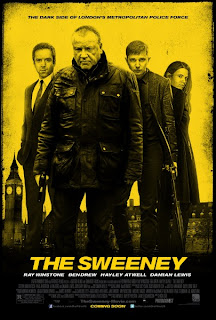 The Sweeney boasts an even more impressive cast, with Ray Winstone opposite Hayley Atwell and reporting to Damian Lewis—oh, and rapper-turned-actor Ben Drew does some very solid work, more so as the film progresses. However, what the film ultimately does with Atwell and Lewis is indicative of its larger problems, which occur mostly on the level of script: they serve as devices or as stand-ins for "types," and this doesn’t really leverage the talents of these actors. Sure, some dramatic shorthand in a crime thriller about an elite squad hunting a particularly nasty robbery gang might be expected. But the fact that already Winstone, who delivers a performance that’s both refreshingly unvain and suitably tough, himself plays a character who’s not given terribly much in terms of backstory or development, lends an hollowness to the drama that doesn’t serve it well. Of course it’s completely possible that the homeland target audience for The Sweeney doesn’t need such extensive character development, at least not for protagonist DI Jack Regan and his kind-of partner George Carter, since the film is a big screen adaptation of a popular ‘70s TV series featuring these same characters. The problem is that moviegoers in the States might not be aware of this—it’s not even mentioned in the press releases I received—and they certainly won’t have sufficient familiarity with that groundbreaking series, innovative in terms of its hardboiled explosiveness and its use of gritty location shooting.

On those latter counts, Nick Love’s new film certainly doesn’t disappoint. The toughness quotient is appropriately up there—although it’s strained in the early-going, conveyed largely by dialogue instead of incident, to become far more convincing the longer we stick with the film. And the London-set action sequences are simply… well, more about that in second. Let’s stay with the main problem here for a moment—The Sweeney’s approach to condensing a TV-scale narrative to fit a low-to-moderately budgeted feature film. In contrast to the common Brit TV practice of presenting its single stories in multiple segments that stretch things out to luxuriant lengths, The Sweeney feels like it’s resizing a large canvas to fit a smaller story platform and a too-diminutive runtime. In other words, if this version of The Sweeney unfolded over three hours, let alone 6 or 12, we might have had a terrific mini-series on our hands. But the requirement of first establishing the numerous characters in the squad as well as all the intra-departmental police politics proves a bit too much for Love and co-writer John Hodge. Steven Mackintosh, playing a character similarly unsympathetic to his in Luther, is the clichéd cop-who-investigates-cops, and his lack of “manliness” relative to Winstone’s Regan is underscored by having the latter conduct an affair with the former’s wife. Not exactly subtle. Nor are the overly familiar scenes of cop chums bonding over pints—not in a cinema landscape that has recently seen Maïwenn’s Polisse handling the same sort of material so masterfully.

The good news, though, is that once The Sweeney gets all that set-up stuff out of the way, things kick into high gear, and that’s putting it mildly. About halfway through there’s an action set piece that made me blink because I couldn’t believe what I was seeing: I’ve been in Trafalgar Square precisely once in my life, and it was a couple of decades ago, so at first I couldn’t trust my visual memory… after all, could the film really be shooting chunks out of London’s top tourist spot? Turns out it could. And it’s not just that the setting itself is kinda astounding—the way that Love orchestrates the sequence and keeps it running well after you thought it would end is highly satisfying. Not quite the iconic centerpiece shootout in Michael Mann’s Heat, but the fact that I’m even mentioning that film says something. Also, later on Drew gets the opportunity to take over the movie in a scene that, in its own way, is equally exhilarating. All in all, the experience was like night and day, as if there were two different films—so if you can sit through the first one, please know that you’ll be amply rewarded by the second. 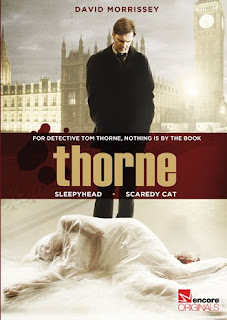 In contrast, the adaptations of Mark Billingham's novels represented by the Thorne series on the new two-disc set are very elegantly paced and structured. They have a novelistic feel in terms of how they handle their themes and multiple storytlines, and are so well produced and directed (by Benjamin Ross and the always-reliable Stephen Hopkins) that you practically won't notice the situations that are not wholly original and the surprises that aren't all that surprising. For example, Sleepyhead uses the chilling premise of Locked-In Syndrome, wherein a victim is paralyzed and unable to talk but still fully able to think and therefore communicate to us through voice-over... which was also the premise of a particularly well-known episode of Alfred Hitchcock's TV show that starred Joseph Cotten. Yes, I'm being reductionist here, and Hopkins does a wonderful job with the psychological angles, but long-time fans of the crime and suspense genres won't feel they are being exposed to any new ground; other viewers, though, may actually be blown away. Similarly, Scaredycat is very clever in its presentation of its twists and turns, but its final big reveal is one that diehard horror fans (yep, horror) will see coming from about a football field away.

In the end, then, what do we have? A movie that feels like it's trying to abridge a crime saga into two hour-long TV episodes, and a TV mini-series that provides self-contained stories that look and feel like well-executed feature films. I'm not too sure if we can generalize about the state of the Brit crime genre as a result but the odd convergence of media that's occurred since The Sweeney first aired decades ago certainly alters how we respond to such texts; after all, at some point audiences will mostly watch these thrillers the same way--via some streaming device that sends them to a mobile, computer, or TV screen per those Hulu and Netflix titles mentioned earlier. Until then, fans of the genre will have to make more of an effort to catch them, thus getting a chance to prove their fannish commitment at the same time.