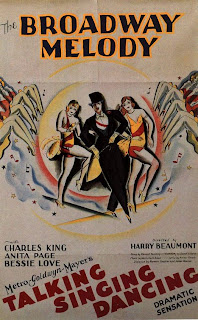 This won the Oscar for Best Picture? Really?

Okay yes the pickings that year, at least asfar as the nominees were concerned was slim, but Best Picture?

All kidding aside the film isn't a bad one, it's just not one of the best.

I recently, finally, saw the film when I was given the Best of Warners 20 film box of musicals to review. I had never seen the film and was intrigued at the prospect. I was also kind of intrigued in how I over the years I completely missed the film. After seeing the film I was kind of content to just scribble notes to that effect for the review until I started to talk about the box set and the film and I began to realize that pretty much no one I knew had any memory of seeing the film. Some people said that maybe perhaps they might have seen it, but they weren't sure... I was then sure I had to write the film up for Unseen.

The plot of the film has Hank and Queenie Mahoney coming to New York to be in the new production by Francis Zanfield. Hank (who I assure you is a woman) is the girlfriend of Eddie Kerns who is a performer in the show. Eddie is bringing the girls to NYC so that they can be in the show and so that he and Hank can finally marry. Complications arise when almost instantly Eddie falls for Queenie, the younger girl and whom he hasn't seen since she was small. Will the couple find true love and will the girls remain in the show despite efforts to get them removed?

Old time musical with a few musical numbers (several of which involve the title tune),  some witty pre-code dialog and situations (we see the girls in their undies several times) and a number of genuine laughs Broadway Melody is an amusing romp of the sort they don't make any more. I mean that in a good way and a bad way.I mean it good in that it's the sort of fun film we think of coming from Hollywood. I mean it in a bad way in that the technical limitations of sound limit some of the camera movements and restrict the set ups. The film feels creaky.

And yet the film is rather refreshingly adult. There are imlications of things going on between adults, Some of the backers are wolves looking to score, there is largely unvieled talk of homosexuality and general bad behavior. I know the enforcement of the Production Code a few years later would put a stop to this, but for now, for this film you actually get show business people who behave like show business people.

For me the interesting thing was seeing how the musical form began to shift toward the big production numbers. Where say the Jazz Singer had songs in context of the real world, here was a film that had that, but also began to shift toward fantasy numbers. Yes the numbers are from the Broadway show they are putting on, but they kind of aren't since two of them are only seen as such in retrospect.