Putting The Act of Killing: The Director's Cut (2012) on to your radar New Directors New Films 2013 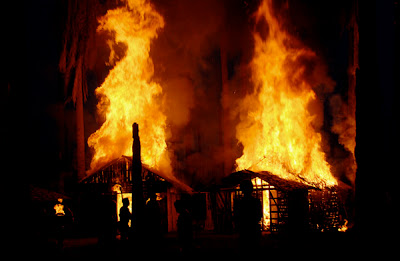 Joshua Oppenheimer's look at the men who committed genocide in Indonesia is a kick in the ass. The audience during Sunday's screening were literally covering their eyes and holding their hands in front of their faces near the end. It's not that there was anything graphic at that moment it's just that there was an emotional gut punch which I think surprised some people.

The film was started by Oppenheimer as a means of recording the stories of the the survivors of the mass killings inflicted on the Communists and undesirables by the rulers of the country. Contrary to most tales of genocide this one was celebrated by the killers. When Oppenheimer found he couldn't film the survivors it was suggested that he film the killers- which he did and then things got weird as he begins to make a family film about mass killing (with musical numbers) with some of them. (yes it gets very strange at times)

An examination of the nature of "evil", the film really looks at how the people who do these bad things are really the same as you and me, they only tell themselves different stories so they can live with the darkness. In looking at these ordinary men Oppenheimer shines a light on how these terrible things keep happening. While it is specifically about what happened in Northern Sumatra, the implications for the rest of the world are apparent (Oppenheimer related how he was filming one man who told stories and posed in a manner similar to the photos that came out of Abu Ghraib)

I'm going to do a fuller review closer to the theatrical release (I want to see the theatrical cut and I want to try and talk to the director), but for now I want to get the film onto your radar. This is a film that really must be seen since you'll find yourself talking about it for hours and days afterward.

To be honest I'm not sure what I think of the film, but it's certainly one of the most important films of the year.
Posted by Steve Kopian at March 25, 2013