Tuesday at the free Korean Cultural Service screening in Tribeca: YOUNG GUNS IN THE TIME 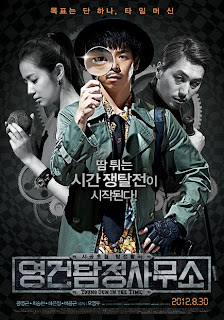 Tuesday is the start of the next series of films from the Korean Cultural Service :Micro budgeted films. This looks to be a killer series. The next film is Bloody Fight in Iron Rock Valley which several of us at Unseen put on our best of the year lists. First up is YOUNG GUNGS IN THE TIME. I have not seen the film and I'm hoping to get to Tribeca for the screening. The Korean Cultural Service describes the film as follows:

Director Oh Young-Doo and producer Kaizo Hayashi (president of the jury at Japan’s Yubari Fantastic Film Festival 2011) team up for this intense, dramatic adventure! Young Gun (Hong Young-Geun) is a petty detective drawn to a mysterious woman with a startling personal request. After turning her down, he follows the starlet out of his office, only to see her killed in a violent car accident. Traumatized, he’s soon even more shocked to see the same woman appear before him, begging him to find a way back in time so that he might save her life. Young Gun has only three days to complete his task… but first, he’s going to need to find a time machine!

Financed for an amazing low budget of $45,000, more than half of Young Gun in the Time’s funds came from the cash prize from Director Oh winning the Grand Prix at the Yubari Fantastic Film Festival in 2011!