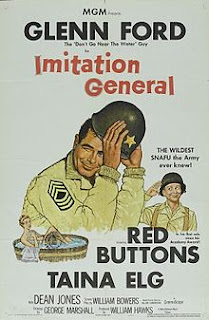 The Imitation General used to be in heavy rotation on cable many years ago before Turner Classics was the outlet for oldies. This was way back when stations like Cinemax, The Movie Channel and others actually ran a wide array of films including oldies. It was a film that my brother and I would watch every time it came on.

The plot of the film has Glen Ford in full comedic mode as a Sargent trapped behind enemy lines with Red Buttons and a general. When the general is killed at a pivotal moment in the battle Ford, realizing that the death of the general will cause panic, steps in and pretends to be the general. What follows is a comedic battle as Ford must shift identities depending upon his situation so that the guys who know who he is won't rat him out.

Amusing as the best of Hollywood comedies can be, this is a film I really like a great deal. There is this wonderful non-taxing nature of the film that makes it the perfect film to just sit and relax to. Its one of those big budget comedies with big stars that was just trying to be funny and nothing else. It's an attitude that Hollywood would soon begin to lose with the death of JFK, the Vietnam War and the influx of a new generation of serious minded European directors.

Helping to sell the plot is the great cast headed by the wonderful Ford, who is in full on flustered mode. Here's a guy who is simply trying to get himself and his men out of a bad situation but he has to juggle identities and a budding romance. Red Buttons is a blast as Ford's right hand man. Buttons is essentially playing his patented second banana role and he nails it perfectly. The rest of the cast including love interest Taina Elg, a pre-Disney Dean Jones,  and Tige Andrews sell their roles extremely well.