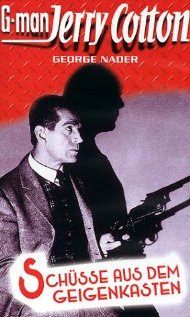 First of the Jerry Cotton films is okay but it made me wonder how this spawned numerous sequels.

Cotton is an FBI agent who always seems to get the job done. He is described by one character as being able to find clues other people miss.(I'll come back to that in a minute). The plot of the film has Cotton brought into a investigate a series of robbery/murders that have been linked by phone calls from the sister of the moll of the gang to the head of the New York chief of the FBI. Cotton springs into action and from there there the plot spirals out in ways that include a plot to blow up a school full of kids (referenced in the title).

In all honesty this is a silly film with Cotton's ability to see things no one else can in the evidence pulling things out of thin air, with Cotton simply stumbling upon a good looking girl who happens to be the girl making the calls and later deducing that the owners of a bowling alley are involved in the case. If you can get past the frequent "huh?" factor this is a watchable entertainment, but nothing truly memorable.

Worth a look on a slow night of for those who want to see where the later, better Cotton films, came from.

(Also worth a look for the stock and process shots of New York in the early 1960's. They really use a great deal of footage to make it seem like it was shot in New York)
Posted by Steve Kopian at March 04, 2013