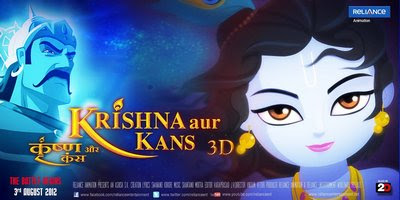 I had seen the demoness song from this film untranslated and out of context and thought it looked incredibly dumb. Then the New York International Children's Film Festival programmed Hey Krishna and I was forced to do a double take...they don't program films without first seeing them so there must be something to it.

There is something, it's a damn fine film.

The film tells the story of the evil Kans. He is ruthless warrior who will stop at nothing to rule the world and bring glory upon himself. When he discovers that the eighth son of his sister will destroy him he locks her up on her wedding day. However Kans is taking no chances and as each child is born Kans has it killed. When the eighth child is born, it is the human form of Krishna who instructs his parents to switch his human form with a baby born in a nearby village. When Kans decides to kill the girl who has taken Krishna's place a goddess appears and tells Kans it's too late, Krishna has been born and his doom is sealed. Kans then sets in motion a plot to kill the child before he can threaten him.

This ain't Disney, Pixar or any western animation house. This is a film out of  India full of gods and demons and darkness and light. Its a film that is unlike anything anyone who has been raised on happy American films has experienced - I mean children die, people die, demons are stripper sexy and are killed in a manner Walt would never have stood for. Hell a the demoness sings about her honey pot. This ain't Hollywood and we are oh so blessed as a result. 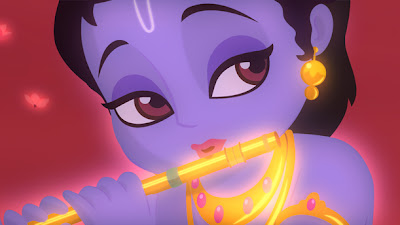 Telling a huge epic story, this is a film that is something truly special. To be fair some of the animation a little too mechanical but once you get past that, which is easy, the film falls into place. This is film that works on both the large mythic scale and the small human one. You do care about the characters which is a plus since there is so much mythical stuff going on they very easily could have gotten lost.

What I like about the film is it takes it's time telling the story. Watching the film I was kind of wondering where the film was going since Krishna doesn't show up for about 45 minutes which is over a third of the film. Sure Krishna is important but I like that we have this great back story that makes us care about what is going on and makes us realize that there is a real cost for everything that is happening.

Outside of the demoness evil song, which is silly, the songs that occasionally pop up are pretty good. Matched with the colorful animation they end up as wonderful pieces of eye and ear candy. (and yes they sound fine in English)

A word of explanation- Hey Krishna is the first 3D animated feature from India, but the film isn't being run in 3D at NYICFF. Apparently there are no English language  3D prints of the film at all (neither subtitled nor dubbed). The choice was either run it in 3D in Hindi or in English in 2D. The festival opted for the English.

Search this one out and just go with it for what it is and I assure you you will be rewarded. 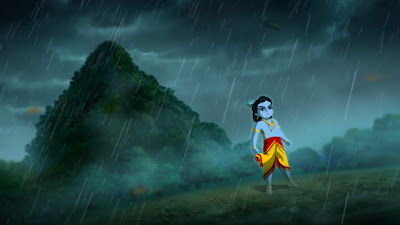