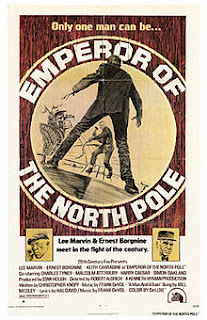 Bleak tough film stars Lee Marvin as a hobo of the old school. He is looked on with deference by many other hobos. He is annoyed by the attention of Keith Carradine, a young man just starting out in the life. When the evil Ernest Borgnine, a conductor on a freight train pushes things too far (he takes great pride in crippling or killing anyone who hitches a ride on his train), Marvin decides to take him on.

Good movie about life on the road turns great in the final hour or so as Marvin and Borgnine go after each other in one of the most brutal confrontations ever put on film. While not gory or overly bloody the sequence is so intense that it is all you’ll remember from the film. There is something about the two old pros going after each other more or less hand to hand that has a gravitas that most other films can never hope to match.

Yes I know this is the wrong way to watch a film, but at the same time to me that IS the film...and it's one of the finest action set pieces ever put on film.

Definitely a film you want to keep an eye out for. I know it still gets regular play on cable and elsewhere and it's absolutely worth putting on your must see list.
Posted by Steve Kopian at March 27, 2013