Based on a series of children's books this film is the completely charming tale of a mouse who isn't afraid of bears (despite being taught they are bogey men) and a bear who just wants to eat and perform. How they come together is the movie.

Animated in the style of water colors this is an animated film that really doesn't look like anything else out there. Its a film that is visually  in it's own world. It's a world where the mice live below and the bears live above. The two are of course never suppose to meet, despite being essentially the same and living off each other (The mice raid the bears for teeth which they use to replace their own). 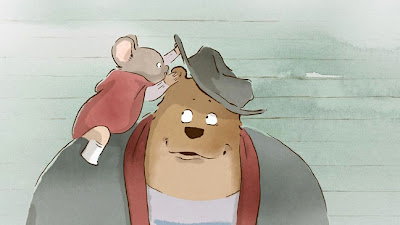 The film is also unlike any other recent animated film because at it's core is Ernest and Celestine two of the most charming characters you're likely ever to meet. While I think that much of the charm comes from the fact that the characters have been well explored in the 23 or so books in the series, the real reason is the vocal performances of Lambert Wilson as Ernest and Pauline Brunner as Celestine. Rarely are performances this spot on. They are so spot on that I'm kind of worried that when the film gets a US release later in 2013 that they will wreck the film by having the wrong voices in place.

(An aside- The day after writing that line I ran into the Eric Beckman, the director of the New York International Children's Film Festival and one of the great people behind GKids the releasing arm of the festival which has picked up the film. He told me that they are very aware of the problem of finding the right voices with the right chemistry to get the film in English. He said that the producers had a devil of a time getting the original version right. Once  they had Wilson they still had no Celestine, and because of time constraints asked one of the producers daughters to just read the lines so they could record the dialog. The performance was so magical they decided to use her in the film. Eric said that they are again having trouble finding their leads, and while they are considering getting Lambert Wilson to repeat his performance, they still can't find a Celestine. They have considered asking Pauline Brunner to repeat,but she does not speak English and they are worried less about the ability to say the words as being able to capture the right inflections to match the original. It may sound trivial but if and when you see the film you'll understand how important it will be to match the perfect original.)

Much of the film is in its way a perfect or near perfect series of set pieces and sequences, from the opening bed time story on to the mouse fairy to Ernest and the crumbs to the meeting of the pair,to their flight into the woods, the painting  of the van, the time in the house where they discover each others abilities on and on and on. Rarely has any film ever made a film of any sort that has such a great series of magical sequences  as this. Additionally wonderful are the tiny touches that play out in the background that seem  to be throw away but build a wonderful sense of the world and the growth of the characters- I won't reveal everything, but watch the doll.

Watching the film I found my admiration for bits of the film going up and down. There are a couple of things that I wasn't crazy about, but when the film ended and I was filling  out the audience ballot I found that taking the pieces (story, characters, ect) seperately I had no reservations, looking at my card I couldn't help but give the film a perfect score. Thinking about the film after that I found that I liked the film more and more. The more I thought about it the more I loved. The more I embraced it the more I fell in love with it. 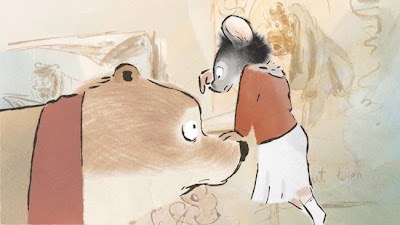 How great is the film?

Walking into the festival the next day I was greeted by Mr Beckman who stepped away from his festival duties to talk to me about the film. He simply asked me what I thought and what then followed was a long passionate discussion between the two of us about the wonders of this wonderful film.  It was a discussion that continued off and on until the first screening started, at which point we started talking about The Day of the Crows (a review will run tomorrow)

Let me tell you how good the film is simply: expect it to be on the Oscar shortlist for best animated film (at the least). Also expect to see it on my best of the year list. yes it's that good.