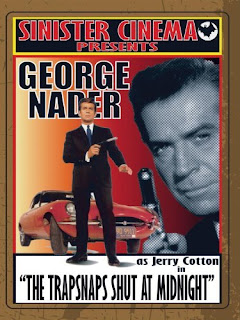 After a fire at a work site a truck full of nitro is turned back. While the drivers are in a diner eatting two men steal the their truck unaware that it is still loaded.  The truck is to be used in a robbery by being crashed into the front of  Cartiers ...however when the truck is crashed the nitro isn't it and it becomes a race to find it before something happens.  The problem is the guys set up the robbery have double crossed  by the driver. The gang then hunts down the driver, takes the nitro and begins a blackmail scheme

Unlike the first two Cotton films, here  Cotton is largely a non-entity. Yes he's called in for a bit of action here and there, but mostly its a search for the bad guys and the nitro. Actually the film is actually the film is pretty much a conventional police crime drama, with an occasional action sequence and a euro-crime style. Watching the film you'd never know that the film was part of any series or warranted one because you could pretty much plug in any actors and have it work. This is not a slap at the film, rather its simply to say that the film is pretty good even on it's own terms.

While most of the entries in the series have a great deal of New York footage incorporated into them, this one doesn't. The biggest use of New York is a sequence on the Manhattan Bridge where a canister of nitro is suspended in an attempt to let the FBI know the bad guys mean business.

I should probably mention the two flaws in the film, the first being the over use of rear screen projection (though it does put them in the legendary TWA terminal at Kennedy airport) and the other is the artificial "we must find the nitro before the heat causes it to blow up". For a while it's a clever plot point but by the second half you would have thought the bad guys would have realized the danger in storing it.