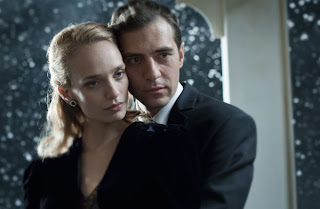 After the accidental death of his father in the printing press...

Damn near impossible to describe film has a young man recruited by the Bulgarian secret police to spy on people at his school. When the police decide they don’t want his help he continues to do so anyway creating his own bureau… (I'd say more but it's best you discover the twists and turns on you're own)

To say that the film is weird is an understatement. This is an off kilter walk through a fun house hall of mirrors. Nothing and no one is normal, but they are all so compelling that you simply have to keep watching no matter where it goes.

Adapted by Vladislav Todorov from his own novel this film plays exactly like a work of literature taking its time to twist and turn all over the place. No one it seems is on the level and no one is playing anything straight. There is no one anyone can trust except themselves. It’s also so twisted that ten minutes in I gave up trying to figure anything out or what it meant and just let it wash over me.

You're bookish you're thoughts are borrowed...

As to how close this is what it was like in Bulgaria before the fall of communism your guess is as good as mine, but it’s clear the society was designed by his holiness Franz Kafka with an assist by George Orwell. And while I’m very aware of how absolutely cliché that sounds there is no other way to simply explain what it’s like. Saying the film is weird won’t cut it, you’ll want to know weird how. It’s weird like Kafka but only nine or ten degrees weirder.

The film stays the course of compellingly strangeness for most of its running time before going off the rails about 90 minutes in. There is a point where the film jumps ahead two years to after the fall of communism. At this point the film seems to have morphed into another film all together. We don’t fully know how we got from there to here and the result is jarring. The result is the kind of like getting on a train heading toward Boston and then suddenly finding you’re pulling into Chicago. You’ve made the trip safely and pleasantly but you don’t know how you got there.

I really like it a great deal. It’s so unique and out there it’s impossible to be a lover of the offbeat and weird and not love it. It’s a film that forcibly engages you until it’s very last moment which makes it thrilling.

For me the real joy of the film was listening to my fellow reviewers trying to make sense of the film after the screening. No one could get a handle on the film. No one could make heads or tails of it. One person complained about the ending, some people babbled about the whole thing. Most dismissed it because it didn’t fit their idea of what a film should be. One gentleman went around sing songing about how bad a film it was (and yet I could tell during the film he was laughing at many of the jokes). Any film that confuses and confounds a theater full of critics this badly has to be great.

If you want a film that will challenge you, frustrate, amuse and engage you see this film. I doubt you’ll see another film like it this or any other year.