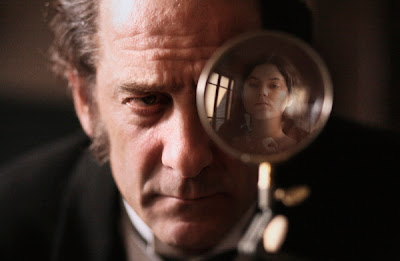 I'm going to state up front I'm going to be bitchy and reveal the end of the film. if you don't want to know keep reading- however note this is a not particularly successful film (hence the bitchiness) with a killer performance by Soko as a young woman prone to seizures.

The film begins with Augustine, a maid in a fancy house, serving dinner to the family she works for. All is going swimmingly until she has a seizure and pulls the entire meal on top of her as she writhes around the floor. With her right eye seemingly permanently closed she goes with her cousin to see a doctor who diagnosis ovarian hysteria and admits her to the hospital. She attracts the attention of Mr Charcot who is trying to help women with her condition,which allows him to gain attention for his program.

A good looking film, that out side of a stellar performance by Soko as Augustine is one I can't really recommend. Soko some how manages to convulse on cue in such a manner it's truly frightening. During the film all I could think about was how much better David Cronenberg's A Dangerous Method would have been with her in the lead. When the first seizure happens at the dinner party I kind of sat up in my seat because it looked a bit too real.

The problem for me comes from the fact that when the film ends I couldn't figure out why I was being told any of it.  Seriously the film is a series of treatments and exhibition between the doctor and patient, that seems to imply in the end that getting laid will cure all your ills. Forgive me but the vast majority of the film is longing looks between the two and then she's cured, she sleeps with him and goes off into the night.

I know I'm reading it wrong but the implication seems to be that it's all sex (I mean she drops when she sees a cute guy at the dinner) and that if she  has sex she'll be fine. (And watch how her seizures change from epileptic in style to sexual once she's with the doctor a while.)

Even allowing for it all being sex, the questions for me are first whats the point? why are we seeing this? I have no clue. And second why so much repetition? Its all variations of the same thing over and over again. Frankly I stopped caring about an hour in and I hung around waiting for a revelation that never came.

Perhaps I missed something,perhaps not. One of the people at the press screening loved the film. I couldn't be bothered.

The film plays the 3rd and 6th if you're interested. 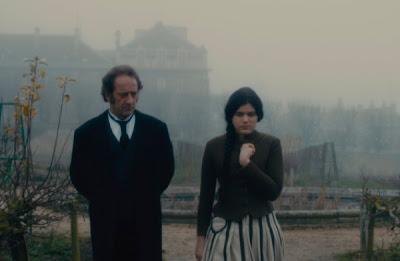