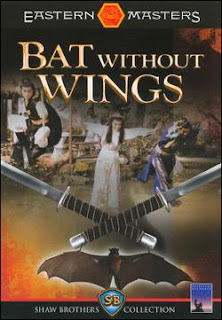 Wild Shaw Brothers film with a villain who looks like a lost member of Kiss, it doesn't make complete sense but it is a great deal of fun.

The film takes place five years after 28 masters fought the evil Bat Without Wings. In the battle all but 2 of the masters were killed. As far as anyone knows the Bat is long dead and buried. Unfortunately five years on the Bat seems to be back, wiping out an entire entourage protecting an officials daughter before kidnapping her and causing all sorts of trouble Into the mix comes an honorable swordsman who is put on the trail of the Bat. As he begins to investigate things begin to take dark turns as stories don't add up and people are revealed to be hiding things

The who and what of what is going on doesn't make a great deal of sense, but at the same time it's full of great action, haunted caves, spooky occurrences (a dead girl walks home to leave her head for her parents before her body walks off into the mist), mystery, great fights (I know I said that but they are cool) and eye popping sets.  My one thought while watching this was to repeated think how neat and cool everything was. Not a lot of it was making sense but at the same time I was having a great time watching all of the nonsense.

This is a film you go into with the brain off.  It is in its way the very definition of a popcorn film, since it requires you to give yourself over to it and  just let it wash over you. Watching the film late one night back in November, actually it was early one morning about 1am,  I was having such a good time I started pulling out more movies when it was done to keep the wu xia vibe going. Sadly the other films were turkeys and some time around 4am I realized I should just have started this film again.

Far from the best film ever made, it is highly entertaining and worth tracking down. Just remember to load up on popcorn and to leave your brain at the door. 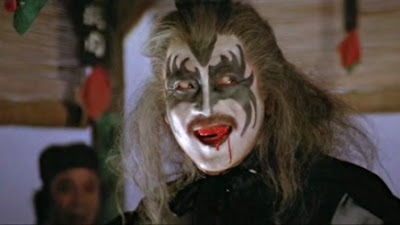