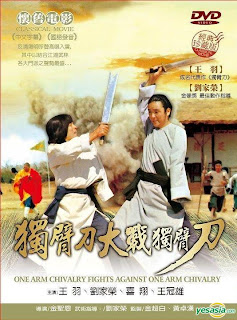 This film has several different names and I’m not sure which is the correct one. But by whatever name you see it, and if you love over top action you should, you’ll see one of the more crazy Hong Kong action films I’ve run across.

The plot has Jimmy Wang Yu, the original One Armed Swordsman, as part of a group fighting to over through the Ching dynasty. When about ten minutes in, he is caught in a trap and stabbed in his left arm with a poisoned needle. In order to survive he nonchalantly chops off his arm above the elbow (though moments later its cut off at the shoulder) and then proceeds to battle ten or twelve armed men with greater skill then before. He then walks off as if nothing has happened. From this point on the film becomes a battle between factions as the good guys try to root out spies, people can’t believe their children are traitors and lots of people try to kill our hero.

It only makes sense on the most basic level, but it really doesn’t matter since the plot is simply the excuse for some of the most over the top and wild action that you’ll see., I mean somewhere in here our hero is attacked by monks using cymbals as deadly Frisbees. Is it real? Oh hell no, and frankly it’s not particularly well done, but it is really cool in a way that touches the inner kid in all of us. This is the sort of weird ass martial arts film we probably come up with when we were about 8, I don’t mean that as a slap, but as high praise since this film has a sense of oh wow that’s cool that most better and more polished films wouldn’t go near because it’s so silly you should get laughed off the screen…at the same time Wang Yu and his fellow actors sell the silliness that you just go with it.

Honestly this movie is stupid as a stick, but somehow I just went with it and had a blast. I was enjoying myself so much as I was watching this at 4 in the morning that I wished I had put it on during normal human hours and in the living room so I could have watched it with my dad.

This film is a great deal of fun and is worth tracking down (it can be had in el cheapo DVD editions and in multi-film sets)
Posted by Steve Kopian at February 06, 2013