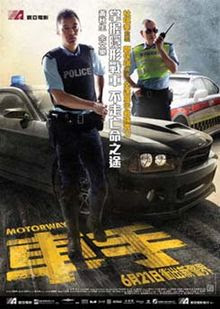 The simplest thing to say is go see Motorway when it plays on the big screen at Film Comment Selects next weekend (actually it plays February 23 and 26).

Those of you who are regular readers know that I had watched this film on DVD a few weeks ago for inclusion in our Chinese New Year series. I really didn’t care for it and said so, adding that I would report back after seeing it on the big screen (since it was clear when I saw it this was a big screen movie). I’ve seen it big at the press screening for the series and now all I can say is GO.

The plot of the film has two cops (one of which is the great Anthony Wong) getting involved in the chase for a legendary getaway driver and the robber he breaks out of jail. Years before the getaway driver was responsible for killing Anthony Wong’s partner and putting him in the hospital.

The plot is secondary to the chases. The chases which played just okay on my 42 inch screen played incredibly on the BIG screen at Lincoln Center. There is something about seeing the POV shots of the cars going down the roads with big theater sound that makes you want to curl up and go along for the ride.

What an absolute blast and a half.

Just remeber this isn’t the high octane computer enhanced nonsense of the Fast and Furious films, rather this is just old school racing which for my money is all you need.