Tuesday at the Tribeca Cinemas: The Window plus short films 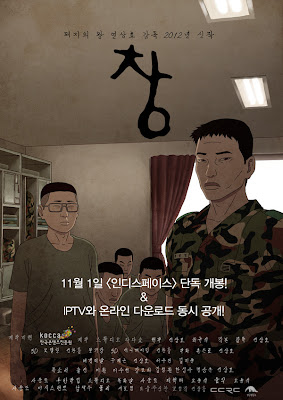 From the director of King of Pigs comes the short feature The Window, this weeks offering from the Korean Cultural Service.  Its a rare screening of the film so if you want to see something most people, especially outside of Korean have never seen get down to the Tribeca Cinemas Tuesday. If all goes well I'll be there myself.

If you want more details this is what the Korean Cultural Service website has to say about the film:

From the director of The King of Pigs comes The Window, Yuen Sang-ho’s rarely-seen first short feature. Private Jung is proud to be a member of a leading military division; but after Private Hong joins, everyone starts to get disrupted. Jung tries to train Hong, who is indifferent to everything, but he only ends up causing even more trouble. After an altercation, troubles become even more intense, leading to a shocking, powerful conclusion.
This special short feature, which is rarely screened outside of Korea, will be accompanied by additional short films. The evening’s program will have a two-hour running time.

Tribeca Cinemas are located at 54 Varick Street, on the corner of Canal Street, one block from the A, C, E and 1 train Canal Street stops

All seating is first-come, first served.