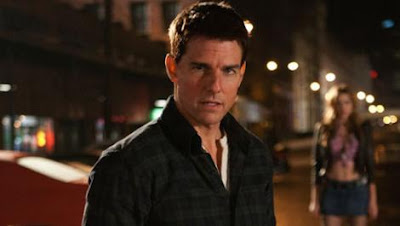 Even before Werner Herzog shows up to become one of the most delicious bad guys on film I was hooked on Jack Reacher, the latest  Tom Cruise film. To be perfectly honest I'm mixed on Cruise as a person and an actor. Yes he can be really good, great even, but his persona in the press is of a nut job so I'm really hesitant to see his films. (It also doesn't help that his recent outings such as the Mission Impossible films,  Knight & Day, Valkyrie and Rock of Ages were not all that good)

Here Cruise plays Jack Reacher, ex- military cop and trouble shooter who in an effort to be truly free has no fixed anything.  He simply drifts and collects his muster out pay via wire transfers. The character was created in a series of long running novels (which I haven't read)  and I believe this is based on the third book, One Shot. (It should be note Cruise doesn't look anything like Reacher as described in the novels, a fact that has pissed off fans of the books)

Here Reacher appears in the wake of what appears to be a sniper shooting 5 random people.  Reacher knows the suspect and wants to make sure that if the person did it he is punished. When Reacher arrives he finds the suspect in a coma and that one of the last things he asked for was for Reacher to be contacted. Of course things are not as they seem and Reacher quickly realizes that the suspect didn't do it and he, and the man's attorney have turned over a hornets nest of trouble.

Right for the role or not I loved Tom Cruise as Jack Reacher. He's a straight shooting, no nonsense bad ass who is going to do the right thing even if people get hurt (and they do). He's a man of action and few words, though those words are almost always choice.  He is a perfect hero in a really good popcorn film.

For much of the film's running time the film is a super "guilty pleasure sort of a film". Its witty lines, good suspense and great action. neatly packaged together. then about two thirds of the way in the film begins to slip, careful plotting goes out the window and things stop working. Worst of all they end up wasting Werner Herzog (how the hell do you mishandle Werner Herzog?) Its not fatal, but it makes what was shaping up that what was my first real surprise of 2013 (I saw this back in early January) just a really good film.

Disappointing last third aside, I still really like the film, flaws and all. I think this is a super little big budget Hollywood action film and if I am completely truthful I really hope that there is a sequel.

Definitely worth seeing.
Posted by Steve Kopian at February 22, 2013