The man behind THE BERLIN FILE: 20 Questions with RYOO Seung-wan

As you read the interview keep in mind that the way this was done was as follows:  I sent him the questions, they were translated into Korean. He gave his answers in Korean which were then translated into English. There were no follow up questions as such since I had to send out all of the questions at once. Once I got the interview back Mondocurry stepped in and gave it all a once over.

And before we start I would like to thank RYOO Seung-wan for taking the time to do this. It was very kind and generous to do so. 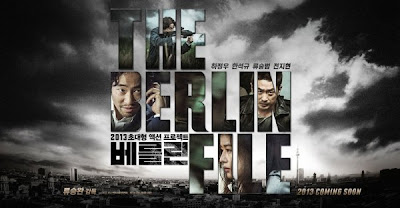 Unseen Films (UF): You talk about the film being influenced by the Cold War feeling that still hangs over Berlin. Watching the film I was really confused for a while since you managed to get the feeling of the 1960's/1970's Cold War paranoia exactly right, I was sure that what I was watching was set several decades ago instead of now. Had you ever considered ever setting the film in a period other than today?

RYOO Seung-wan (RS): When I was writing a synopsis, I thought this has to be showing the current situation. Even in this 21st Century, Korea is still undergoing a Cold War although the official Cold War has ended. Divided into North and South, this tragedy of the 20th Century is still ongoing.

Berlin was once the symbol of the Cold War. It was very interesting for me to talk about the story about North and South Korean secret agents that are still in the Cold War in Berlin.

I thought people would find the story interesting because it’s dealing with the current situation as if it had happened in the past.

I think the reason people feel this way is because this movie depicted the North Korean political system in the same way as its present.


UF: Since the film could, with the simple changing of countries, take place anywhere did you ever consider setting it anywhere else in the world?

RS: In fact, the background of this kind of story can be anywhere in Europe. Maybe better in somewhere Mid-East, in Asia.

However, like I mentioned before, the symbolism of Berlin inspired me more than simply as a background.

Berlin makes a very important role in Korean contemporary history. Berlin is the symbol of Cold War, and the political conference dealing with the independence of Korea was taken place in Potsdam of Berlin.

Shin Sang-Ok, the great movie maker of Korea in 60s’ and his wife was kidnapped and escaped during the Berlin Movie Festival, and The East Berlin Affair, which is related to Korean spies in 70s’ happened in Berlin as well.

For these many reasons, Berlin has become a fascinating city for me.

Maybe I’m not the one who chose Berlin. Maybe it chose me.

UF:  Not only do you get the feeling of paranoia right, you also manage to copy the feeling of many of the Euro-spy movies of the 1960's but in a greatly updated manner. Are you a fan of the films? Do you have any favorites or were you paying homage to any earlier films (sort of like you did with DACHIMAWA LEE)?

RS: I like the HARRY PALMER series with Michael Caine, THE SPY WHO CAME IN FROM THE COLD

UF:How well did you know Germany before you went to film there?

RS:  I’ve liked movies with the background of World War 2 since I was little. I still can’t forget the appearance of German soldiers in the movie. In fact, all I knew about Germany was something I’ve learned in world history and music classes in school.

While I was preparing this movie, I’ve learned a bit about Germany. I still need to learn more. One thing for sure, however, Berlin is a very fascinating city.

RS: In fact, it’s about 30% that was shoot in Berlin. Compare to the budget of ours, price index in Berlin was quite high. We had no choice but to shoot it in somewhere else. We could find Riga, the capital of Latvia. There, we could shoot many scenes including the alley, and the rest was shot in Korea. 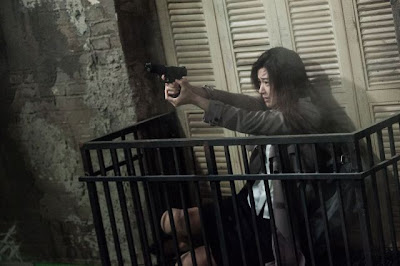 UF:  How much did the script change from what you wrote when you were just starting to put it together to when you got to Berlin and Europe and had to modify it to fit the actual locations?

RS: Not much of the screenplay was changed because we’ve been doing a research while writing the scenario.

One thing though. There is a place called Holocaust Memorial in front of US Embassy. It is to cherish the memory of Jewish massacre, and I was very much inspired in that place. I wanted to shoot scene of the North Korean ambassador applying for asylum but I couldn’t get the permission. We had to shoot in Brandenburg Plaza. I was sad that I couldn’t shoot the scene in fascinating and inspiring place like that.

UF: I have to ask, how did you do the wonderful shot of the train running through the mountains. Was that real or done with effects?

RS:: Oh that one is our secret… I would say there is a little special effect.

UF:The film makes extensive use of German, Arabic and English dialog. How did you get the English lines of dialog right on the page?

RS: First we wrote everything in Korean, and translators translated and checked the lines. It was a huge job…

UF: Was it difficult to film scenes in languages you don't speak, or speak fluently?

RS:  I’ve told you right before, I realized how hard it is to shoot the film when the language isn’t completely under our control. I could tell how bad the curse of Babel is. 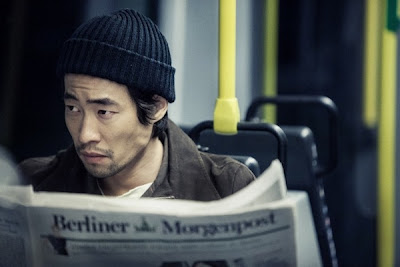 UF: How real is the truly nasty behavior of the North Koreans? Is this really how they operate? I ask this because in the film they are for the most part truly evil characters, while in the US and in many parts of the West they are seen as inept and buffoons.

RS:  One thing for sure is that North Korea is also where humans inhabit. I think our prejudice about North Korea portrays the country as more scary or ridiculous than necessary.

Personally, I have complaints against American movies portraying North Korea and other countries with prejudice, without really understanding the culture.

UF: The question of how the North Koreans really are makes me want to know if you would rather be accurate in the way you portray something in your films or would you rather go for what is dramatically right? Which is more important, the truth of reality or the truth of the story? I mean all of the chases and shootouts in THE BERLIN FILE seem to be completely ignored by the police and hotel staffs.

RS: I think the “truth within the film” is important.

I tend to interview and explore a lot when making a film, because of the reality in the movie.

SF and Fantasy Genres may seem like they are totally different Universe made of false, but there are rules and laws that apply to that very universe.

I think all movies carry realities within itself which demands for it.

I think I try to know what the film I plan to make demands for its reality.

UF: With THE BERLIN FILE, you seem to have swung away from the reality of UNJUST and gone back to the incredible bone crushing action of your earlier films. Do you prefer doing the big action scenes or the taut dramas?

RS: I like them both. Regardless of which is good and which is bad, these two are different so I can’t say I prefer one more.

UF: Do you ever think about whether a film is going to be too "Korean" for international audiences? I ask this for two reasons: First there were a couple of times in THE BERLIN FILE where I felt that I was missing some sort of nuance in the relationship between North and South Korea. Secondly, while DACHIMAWA LEE sends up spy films, it's very much rooted in Korean spy films and films of a certain period that most people outside of Korea simply won't know.

RS: I think this is a situation that is naturally made when experiencing creations from different cultural backgrounds.

But there are expressions such as “All the reading in the world is wrong, and all the translations are wrong.”

In the end, it is only possible to see and hear the things that are familiar.

Because it is in human nature to only see the things and hear the things desired even in the same cultural background.

Sometimes I think it may give more excitement and a source of fun to express things that only Korean people can.

UF: You've made a comedy, action films, dramas and mixes of the genres, which do you prefer to do?

RS: Truthfully, the interest in the Genre itself is declining.

In fact, it’s the people of different Genres that draw attention.

I have made many action scenes while filming, but every time I feel that making a good action scene is a difficult task.

I like Comedy when filming, because the set itself is enjoyable.

I can’t say much, because my mental state when filming isn’t the most logical.

UF: You wrote and produced THE TROUBLESHOOTER for another director. Can you see yourself doing more of that sort of like the way Luc Besson does that in France?

RS: Well… For now, I think I would like to focus on my own film.

UF: Here in the US all films from Korea tend to get lumped, regardless of the type of film they are into a catch all category called Asian Film. How do you feel about this lumping together?

RS: To be honest, Korea is the same.

I think it may be the same just about anywhere in the Universe.

People all want to digest things others have organized neatly.

To see it as a wrongdoing makes life too complicated.

When majority of people mark movies just as “Asian Films,” someone will find amazing movies from Korea, Hong Kong, Japan, and Thailand, that may be the jewels in the Film business.

Then that very audience becomes a very special being.

And if you think of this in reverse, this kind of phenomenon can also make very special and precious audiences.

UF: Right now several of the directors from Korea have made their way to Hollywood to make films for various studios. Would you want to come to America and make movies?

RS: If there is a good scenario and system. However, making a movie in US is not my final destination.

UF: What would be your dream project?

RS:  Well… I hope my next film can be the answer…

UF: What films are you watching now? What are your film viewing habits like? What do you like to watch?

UF: The website I write for is called Unseen Films. The idea is it highlight films that people should take the time to try and see. Are there any films that you think people should see? (And don't worry if it's not American we cover and our readers love films from everywhere in the world.)

RS: I haven’t seen these yet but I would like to recommend the newly released STOKER
Posted by Steve Kopian at February 20, 2013