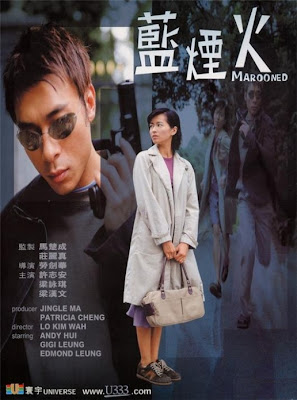 The reason I like the bargain bins in Chinatown is you never know what you will run into. Let me grab a handful of VCDs or 2 dollar DVDs and I’m completely happy since it means I’ll be seeing something I probably never even knew existed. Sometimes I get a film that I should never have discovered, and other times I discover a diamond. Marooned is a diamond.

The plot of the film has a cop sitting on a stakeout waiting to bust a gambling operation in Macao. When the bust goes down he chases the guy fleeing with the money, only to discover it’s his cousin. Talking fast the cousin convinces the cop to hold back the money and return it to his bosses. Despite thinking better of it the cop agrees and when his cousin is hauled off our hero hangs on to the money. However the money goes missing and the cop and his girlfriend are on the hook for it. Given seven days to return the money things get further complicated…

This solid thriller was something I liked so much on VCD that I went through the effort to track down a proper DVD copy. I really like this film and wanted to be able to hand it off to people.

Two things that you instantly notice with the film that sets it apart from most other crime films are first, much of the film is shot in bright daylight. Streets are bright, the windows to homes and offices are open and the light comes shining in. There is a bright colorful palate that makes the film much more alive than most crime dramas which tend to go for muted colors and darkness and shadow, even in the daylight, as if trying to be some form of a noir film. That’s not the case here, here the sun shines brightly.

The second thing is the music. Here the music is biuncier and more upbeat than you expect in a crime film. While it may seem counter intuitive to creating suspense, that’s not the case. A good amount of tension is created.

That the film works as well as it does is a testament to the writing which throws us a few great set pieces, but mostly some really good characters and situations. The characters are the sort of people we actually like. For example our hero isn’t a conflicted anti-hero, but a guy who loves his girlfriend ad just wants to figure out if he should marry her. He’s a guy who is good at his job but might be too nice to do it, as protecting his cousin proves.

I really like this film a great deal, I just wish that more people knew about it….or rather I just wish it was more readily available since the film seems to have disappeared into the void.

Actually this was the second title on my list of films to write up for the blog. It’s a film that’s been waiting three years to be written up, and now that it has I hope that a few of you will be able to discover it.
Posted by Steve Kopian at February 11, 2013