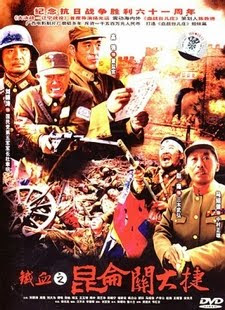 Huge epic war film about the clash of Japanese and Chinese armies at the Kunlun pass. Its the story of an important victory for the Chinese that slowed down the Japanese advance during the Sino-Japanese War that lead into World War Two.

Filmed on a scale that is rare in film, especially prior to todays use of computer generated images. This is a film of huge armies clashing across big battle fields. If you've ever wanted to see what tens of thousands of men look like crashing into each other this is the movie for you. From a visual stand point the imagery is over whelming. Sure the deaths are mostly bloodless, but at the same time I'm not sure that one could endure the film if blood and body parts went flying. This is a film that is grand spectacle (think the battle scenes of Lord of the Rings but with real people and guns).

On levels other than the spectacle I'm not certain what to make of it. To be honest I saw this film with out English subtitles. the DVD I picked up said it had them, but regrettably there were none.(The box also was in error about the running time, it listed 112 minutes when in fact its 130). Without the subtitles I was forced to guess as to what was happening. The narration and titles that explained the characters and events were also lost on me. While I could follow the story well enough (especially after a quick check on line), the details guess your best. Even so there are some major bumps in the film mostly owing to the "rah rah" telling of the story. Made in Mainland China this is a film with a political point and its one that the filmmakers feel they have to spell out frequently. Even sans subtitles its clear there are simply too many moments where talk of saving China lifts the morale of the men, or the wounded off their bed, or makes a bad guy do something good. Its painfully obvious jingoistic propaganda that under cuts the drama. Its moments like this that are unintentionally hilarious in any language (or coming from any country).

Silly propaganda moments aside this is a good war movie. Its the sort of thing that I'm certain will be better when I can see it and understand what is being said.

This is something for war movie fans to keep an eye out for.

(Fans of goofs will have a field day-the most persistent problem being the fact that in many huge battle scenes its clear where the war ends- with no sign of war past a certain distant point)
Posted by Steve Kopian at February 12, 2013