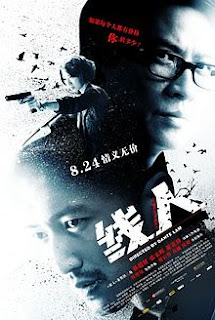 Dante Lam's award winning film is a visually amazing and extremely well acted (Nicholas Tse won a Best Actor Award as Ghost). Its a film which over comes its faults to be something worth searching out.

The plot of the film has a police detective exploiting his informants in order to make his cases. He remains cold to their plight even in the face of them being beaten up or killed. When he brings in a street racer named Ghost to help him bust his next target he begins to have second thoughts about how he handles his "stool pigeons".

There is more of course, Ghost is trying to buy back his sister who is being forced to pay off their father's debt, complications with the detectives wife and of course there is the general twists and turns that the people that crisscross through our characters lives... but you have enough to get you started.

For me the film works best in it's parts. The set pieces are dynamite. I was hooked during the open sting gone wrong when the police informant is chased down dark allies. The chase scenes, including the much heralded White Christmas one, are pulse pounding. The acting is first rate and the scenes involving Nicholas Tse show why he won awards. (I also love his interplay with the "boss's" girl).

The problem with the film is not everything hangs together. I blame it on Nick Cheung's Detective Lee, Ghost's handler. He is a cold and icy at times and on a certain level you're over an hour into the film before he really starts to give you a reason to connect to him. The result is his sequences somehow feel they are apart from the rest of the film.

Ultimately the final 40 minutes redeem the film. From the robbery to the school house the film is finally firing on all cylinders with the result that you are both rocked to the core (the violence in this final section of the film is grade A nasty) and deeply moved.

I really recommend you try and find the film. If it's an imperfect one it's one where the pleasures out weigh the pains. My one real regret with it is that it only manages to sustain the level of greatness at the end because had it done so sooner it might have been hailed as one of the very best crime films of recent years instead of just a really good one.

Currently available on some streaming and VOD services
Posted by Steve Kopian at February 11, 2013