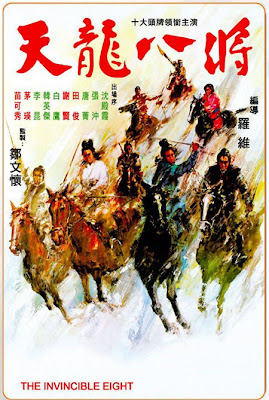 With action that is more ballet than bone crushing this tale of revenge follows the title characters as they come together to get revenge on a general who either killed their fathers or did them wrong in some manner. Intimately running into trouble some of them are captured and thrown in jail where they come together to form a formidable fighting force.

One of the the things that sets this film apart is that the filmmakers actually take the time to make every character stand out. It's rare in any film with a cast this large, and especially in an action film for a film to take the time to make sure that everyone both good guy and bad guy are well rounded. No one is a really a cypher, and everyone has some sort of motivation. Its also done with out a loss of plot or with out the film ever feeling padded or slowed down. The film moves along at a good clip and stops when its appropriate for an action sequence.

The film was beautifully shot in wide screen and seeing the film in it's glory on a big screen TV I could only imagine how much would be lost seeing this in a pan and scan copy.

While the film is for the most part the film is not without it's flaws. As I said at the top the fights tend to be more ballet than brutal, with little contact ever being made. Some twists, such as the good guys having trouble with the villains whips are very silly. There are also a few technical bloopers such as early on when a wobbly paper wall is attacked with an axe and in the next shot we see a hole in a three brick wide wall.

Technical problems aside this is a gripping little film. While not the best martial arts film under the sun, it's easy to understand why the film is considered a classic by many people. Its a film that grabs your attention and holds it all the way to the end . Its also the sort of film that you'll want to revisit, not because it has great action, rather because it tells a really good story.

(And if the title makes you think of the Magnificent Seven consider there is a musical riff heard at one point which is a bit more than homage but not quite our right theft)
Posted by Steve Kopian at February 08, 2013