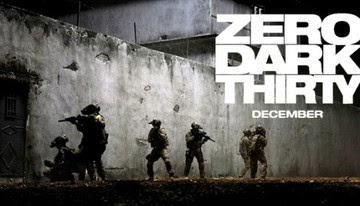 My Oscar catch up continues with one of the most over hyped films of the year Katherine Bigelow's Zero Dark Thirty. Zero Dark Thirty is for much of it's running time a long winded self important film. It's the sort of film that is so solemnly self important that it makes people think that it's actually much better than it is simply because anything this serious must be good. It's also very topical and of the minute which adds to the illusion of self importance, mark my words five or ten years from now we will not be talking about the film.

Telling the story of a CIA operative named Maya, actually a composite of several people, the film tells the story about how in the wake of 911 the CIA tried desperately to find where Osama Bin Laden was hiding. The film, supposedly based on classified information is suppose to tell us what really happened over the 10 years it took to find Bin Laden.

A long drawn out film,this is,for most of it's running time, as dull a cliched bullet point filled film as they come. I've heard it compared to the TV series Law and Order, and in away it's right, but Law and Order was never ever this painfully boring.

The problems with the film start with that at the center of this tale is Maya,a determined analyst who charges into finding her prey with a blind determination that is chilling and sad. There is nothing to the woman but the chase, which is all well and good, but it doesn't make for someone we can connect to. Until the final sequence, I could very well have been looking at a cardboard cut out.

The next problem is that the film is very deliberately structured to hit certain bullet points. We see the torture and the use of spy gear and battles about how to proceed. We also see the other terrorist operations that happened including London and the near Times Square bombing. Everything is arranged in a neat progression that is designed to make things move along dramatically even to the point of putting Maya in danger with a bombing and assassination attempt. Its a progression that is extremely artificial and you can feel the rearrangement of reality to work dramatically...

...which is sad since this very much wants to be a film that tells the truth. It wants to be the record of the event, but it's not because it's so artificial and Hollywood. No, it really is. If you don't believe me time out the various sequences and you'll see what I'm talking about the film is perfectly timed out- I kept going and now we will have a bombing, or x complication. Additionally watch how all of the sequences are put together, look at say the early torture sequences and watch how they play. They may be a realistic representation of what happened but they play as to be almost silly. I mean we have the torturer going into detail about what they are doing to Maya, yes she's suppose to be our surrogate but at the same time it plays all wrong... I mean they hit every Abu Ghraib Kodak moment from the dog collar, waterboarding to Maya checking out one prisoner package- and it all looks stunningly perfect so as to provke a reaction but not offend (Also what is James Gandolfini doing in this film, he's great but too big a star and he upsets the film)

And it all goes on and on and on until Bin Laden is found and the soldiers go in. While the sequence isn't perfect, it does have a sense of being there and a level of suspense that the rest of the film doesn't have. Yes, we know what happened but seeing it actually happen is another matter entirely. Its a kick in the head.

Actually the best thing in the film is the final sequence of the film.The final moments on a huge cargo plane are as close to perfect filmmaking as you can get...the trouble is you have to slog your way through the two and a half hours that proceed it to witness it (or to have it make any sense). For me the beauty of those moments almost make trying to stay awake and not laugh too much at the first two hours of this film worth it. Almost.
Posted by Steve Kopian at February 03, 2013