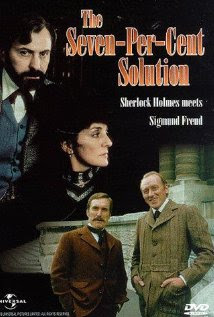 Written by Nicholas Meyer who would go on to write and direct Time After Time and Star Trek The Wrath of Khan , this fanciful Sherlock Holmes film has the “true” story of what happened when Sherlock Holmes supposedly died at the hands of Professor Moriarty. The story involves Holmes being brought to Sigmund Freud to deal with his drug addiction, the 7% solution of the title. While Holmes deals with his addiction he’s thrust into a mystery involving a red headed actress who ends up “kidnapped” by a pasha.

This is one of my favorite Holmes films. It’s a film I completely fell in love with and which helped me realize that there was more to Sherlock Holmes than Basil Rathbone.

Actually what sells the film, which isn’t much of a mystery, is the cast. Nicol Williamson is a perfect persnickety Holmes that seems to fore shadow Jeremy Brett. You feel his madness and his love for Watson. Robert Duvall is Watson. Its bit of casting that sounds completely wrong until you see him in action and the choice couldn’t be more right. Alan Arkin is Sigmund Freud who is more the man of action than Holmes. He is witty and athletic and ready to dive into trouble at a moment’s notice. The mind kind of boggles that Arkin was never allowed to become an action hero. Rounding out the cast is Laurence Olivier as the “evil” genius Professor Moriarty and Vanessa Redgrave is the mysterious red haired girl, a kind of thankless role until you realize how much hinges on her and you realize how well she sucks you in.

Even allowing for personal preferences this is one of the best Homes films ever made. It manages to nail down the characters better than almost any other film or show and tell a good story at the same time (most of other films either get the characters right or has a good mystery, but not both).

Track this film down.
Posted by Steve Kopian at February 23, 2013